Rotator cuff (RC) muscles are important in ensuring the dynamic stability of the shoulder, as they keep the humerus in the glenoid fossa with the proper path of the instant center of rotation (PICR) during shoulder motion (Ha et al, 2013; Page et al, 2010). Sufficient strength in the external rotation (ER) of the RC is essential to approximate force and prevent joint distraction (Reinold et al, 2004). Muscle imbalance in the dynamic stabilizers can lead to functional instability (Barden et al, 2005; Page et al, 2010). A previous study found that the anterior instability of the humeral head is prevented by the posterior RC, which is made up of the infraspinatus and teres minor muscles (Page et al, 2010). The infraspinatus muscle is especially important in this regard, as its role is to externally rotate and depress the head of the humerus (Sahrmann, 2002). Hence, ER exercises are commonly used to improve the sta- bility of the infraspinatus and the teres minor and to restore the balance of force couples during shoulder RC retraining programs (Bitter et al, 2007; Reinold et al, 2004). RC dysfunction can cause force couple imbalance, including increased humeral head translation in the PICR and the impingement of the subacromial structure (Bitter et al, 2007).

Many studies have examined the effect of shoulder ER exercises in the treatment of RC damage (Ballantyne et al, 1993; Ha et al, 2013; Jaggi and Lambert, 2010; Kuhn, 2009; Reinold et al, 2004). In particular, Bitter et al (2007) emphasized that adduction force is important to decrease deltoid action. Ha et al (2013) demonstrated that the side-lying wiper exercise (SWE), which is performed with 90° shoulder flexion supported with the opposite hand, is the best exercise to increase selective infraspinatus function among various strengthening methods. Further, the SWE was found to be the most effective exercise to maximize infraspinatus activity (Ha et al, 2013). However, the previous studies have not focused on how to control the compensation of the posterior deltoid using adduction force.

Each participants’ dominant arm was measured (Bitter et al, 2007). The electrode for the infraspinatus was placed 4 ㎝ inferior to the scapular spine and parallel to the lateral aspect of the infrascapular fossa, the electrode for the posterior deltoid was placed 2 ㎝ inferior to the lateral border of the scapular spine and angled obliquely to the muscle fibers, and the electrode for the pectoralis major was placed 2 ㎝ from the axillary fold over the chest wall horizontally. The EMG activity of the muscles was filtered (20-300 ㎐) and sampling a rate of 1,000 ㎐. The EMG signal was converted into a root-mean-square (RMS) signal to quantify the raw signal, which sampled the RMS signal at 50 ㎳. 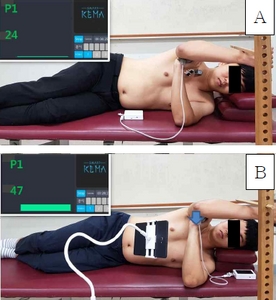 The subjects practiced the SWE three times to become familiar with the exercise before testing. The subjects held a 1-㎏ dumbbell during all shoulder ER tests. The subjects were asked to externally rotate their dominant arm until they touched the target bar with their radial wrist and to maintain this position for five seconds. The subjects were also asked to hold their dominant arm with the palm of their opposite hand and to perform two different SWEs (Ha et al, 2013). For the SWE with adduction force, while holding down the arm, each subject was asked to note his or her force in the 90° internal shoulder rotation position on the Smart KEMA pressure sensor; after, the pressure of the arm weight was confirmed. Then, the subject was asked to watch a tablet connected to the VPBU to check his or her pressure biofeedback and to externally rotate his or her shoulder to the target bar while maintaining the pressure of the arm weight.

Only the middle three seconds of the five seconds were used for the EMG analysis. A metronome was used to control the contraction period. The subjects were asked to repeat each test three times, resting for 30 seconds after each trial (Ha et al, 2013).

A smart KEMA pressure sensor (Factorial Holdings Co., Ltd., Seoul, Korea) was used to measure and control the pressure of the dominant arm weight. Smart KEMA VPBUs consist of a distal device and pressure pads (width: 15 ㎝; length: 6 ㎝; height 3 ㎝). The pressure unit is ㎜Hg (range: 0-258.57 ㎜Hg), and the pressure signal is transferred to a tablet through a Bluetooth connection. These data were recorded and analyzed with the Smart KEMA application software (Factorial Holdings Co., Ltd.).

The data are shown as mean±standard deviation. Paired t‑tests were used to compare the EMG activities of the infraspinatus and the posterior deltoid between the general SWE and the SWE with adduction force using a VPBU. The ɑ level was set at .05 to determine statistical significance. SPSS version 23 (SPSS Inc., Chicago, IL, USA) was used for this analysis.

The EMG data of the infraspinatus were normalized and are presented in Table 1. There was no significant difference in the infraspinatus activity between the SWE with adduction force (28.33±12.16%) and the general SWE (26.54±13.69%)(Table 1).

Adduction might stimulate the pectoralis major antagonist and reduce the posterior deltoid to induce proper co-contraction. Muscular co-contraction is essential for stability (Lee et al, 2006; McGill et al, 2003). Gribble et al (2003) demonstrated that the co-contraction of agonist and antagonist muscles plays a role in increasing the accuracy of arm movement (Gribble et al, 2003). In this study, the ratio of posterior deltoid and pectoralis major activities was close to 1 (the SWE with adduction force: 1.26, the general SWE: 3). This means that a similar intensity was used for posterior deltoid (7.53 %MVIC) and pectoralis major activity (8.07 %MVIC) during the SWE with adduction force (Table 1). This reduces humerus translation and helps ensure that shoulder ER in the glenohumeral joint is stable and accurate.

In previous studies, the amount of pressure applied to the opposite palm during the general SWE was not studied, but this was measured in the current study (mean value: 24 ㎜Hg). To prevent the overuse (greater than 10% of MVIC) of the pectoralis major due to excessive adduction force, we allowed subjects to maintain the adduction force of their arm weight (mean value: 47 ㎜Hg). Maintaining excessive pressure when applying adduction force can lead to increased pectoralis major activity as the muscle acts as an antagonist of shoulder ER. Jaggi and Lambert (2010) mentioned that using the pectoralis major could cause the recurrent instability of polar pathologies, such as trauma, neurological dysfunction, and muscle patterning. Therefore, clinicians should consider a patient's condition when applying adduction force during the SWE.

In this study, using a VPBU during the SWE showed more favorable results in terms of the proper contribution of muscles than performing the SWE without a VPBU. Many studies have used biofeedback for muscle learning, controlling muscles, reducing compensation, and effectively strengthening target muscles (Koh et al, 2016; Lim et al, 2014; Reinold et al, 2004; Roy et al, 2010). For example, Faucett et al (2002) used a biofeedback training protocol for muscle learning therapy. In addition, Koh et al (2016) demonstrated that using a VPBU is effective for increasing gluteus maximus activity and pelvic sway during the clam exercise. Further, Roy et al (2012) demonstrated that individuals with SIS can improve compensatory kinematic deficits after performing unsupervised movement training with visual feedback using a mirror. Clinically, having patients perform the SWE with adduction force using a VPBU can reduce the compensatory movement of the posterior deltoid and allow them to effectively per form unsupervised training with a stabilized humerus.

This study has limitations that should be considered. First, only healthy subjects participated; healthy shoulders and injured shoulders were not compared. Second, we did not measure the activity of the teres minor muscle. This muscle might be important when acting as an external rotator in the shoulder. Third, we could not prove the long-term effect of performing the SWE with adduction force. Further studies should determine the effect of the SWE on individuals with injured shoulders.