The craniocervical flexion (CCF) exercise is one of the effective exercise in correcting forward head posture (FHP). However, some people with FHP achieve CCF with compensatory movements, for example, low cervical flexion using superficial neck flexors such as the sternocleidomastoid (SCM) muscle. No study has yet investigated whether a dualpressure biofeedback unit (D-PBU) method to prevent low cervical flexion would be helpful in performing pure CCF movement.

A CCF test can be used as an indirect measurement of LCM contraction ability and be used to evaluate an individual’s ability to perform and maintain precise upper cervical flexion without mid or lower cervical spine flexion (Chiu et al, 2005; Mayoux-Benhamou, 1997). CCF is associated with the interrelated action of the LCM and longus capitis muscle to support and stabilize the lordosis of the cervical spine (Jull et al, 1999). However, some subjects with neck disorders perform CCF by retracting the cervical spine, using superficial neck flexors such as the SCM instead of pure CCF movement through deep neck flexors contraction (Chiu et al, 2005: Jull et al, 2000). This usage is related to uncontrolled movement such as upper cervical flexion with excessive low cervical flexion during the CCF movement (Comerford and Mottram, 2012).

The purpose of this study was to confirm the effects in subjects with FHP of using CCF using dual- PBU (CCF using D-PBU) method compared with the traditional CCF method using one PBU on a crosssectional area (CSA) of the LCM and the activity of the SCM muscle. We hypothesized that the CSA of the LCM would be larger and that the activity of the SCM muscle would be lower when using the CCF using D-PBU method than when using the traditional CCF method.

Twenty-four volunteers (16 males, 8 females) aged 20∼30 years at Yonsei University in Wonju participated in this study. The characteristics of the subjects are shown in Table 1. The inclusion criteria included ⑴ a young age (20∼30 years) and ⑵ the presence of FHP, where FHP was defined as having a craniovertebral angle less than 50˚ (Ruvio et al, 2017). The craniovertebral angle is a crossed angle between the line from the tragus of the ear to spinous process of the C7 vertebra and a horizontal line of the C7 spinous process in the sagittal plane (Yip et al, 2008). The reflective markers were an attached C7 spinous process and the tragus of the ear. Subjects were asked to flex and extend their necks three times until the head was in a comfortable position (Yip et al, 2008). The head and neck posture were recorded using a digital camera (Samsung, Seoul, Korea). To confirm subjects with FHP, Image J imaging software (U.S. National Institutes of Health, Maryland, USA) was used to measure the craniovertebral angle. Exclusion criteria included ⑴ being unable to achieve 30 ㎜Hg in upper cervical region through CCF ⑵ having a previous history of shoulder and neck surgery. All participants signed informed consent forms, and this study was approved by the Yonsei University Wonju Institutional Review Board (approval number: 1041849-201710-BM-123-01).

The Myson U6 (Medison, Seoul, Korea) was used to record the image of the LCM. To measure the size of the LCM, a linear transducer (5-12 ㎒) was placed 2 ㎝ below the thyroid cartilage, perpendicular to the neck. To increase reliability, the examiner marked the location of the transducer with a marker. In this position, the outlines of the LCM can be visualized by the vertebrae body (inferiorly and medially), retropharyngeal space (superiorly), and carotid artery (laterally). The CSA of the LCM was calculated from the outlines linking the vertebrae body, the retropharyngeal space, and the carotid artery (Janvanshir K, 2011). The change in the LCM CSA during each CCF methods were shown as a proportion of the LCM CSA at starting position (ending position/starting position) (Jung et al, 2015).

The activation of the SCM muscle was measured by EMG (Noraxon Telemyo 2400T, Noraxon, Scottsdale, AZ, USA). The electrodes for the SCM were placed 2 ㎝ from each electrode, parallel to the SCM muscle fibers, and were attached around the middle part between the clavicle and the mastoid process (Criswell, 2010). A Myoresearcher XP Master Edition (Noraxon Inc., Scottsdale, USA) was used to collect signals. A band-pass filter applied between 20 ㎐ and 450 ㎐ to filter the raw signals. Root mean squares were calculated using 50 ㎳. The data were recorded at a 1000 ㎐ sampling rate.

To normalize the EMG signals of the SCM, maximum voluntary isometric contraction (MVIC) was used. To obtain the SCM MVIC data, the standard manual muscletest position was used. Each subject was asked to lie supine, and turn their face toward the nontested side, with lateral flexion against resistance in the opposite direction above the temporal region, applied by the examiner (Kendall et al, 2005). The MVIC data was collected three times for five seconds, with a three minutes rest between muscle contractions. To calculate the mean value, the data from the middle three seconds of each trial were used. The EMG data of SCM was expressed as a percentage of the MVIC. The data of SCM activity was collected when PBU pressure of upper cervical region achieved 30 ㎜Hg.

Prior to the measurement, the order of the trials was randomized to remove any order effects, based on a random number generating process using Microsoft Excel ver. 2010 (Microsoft Corporation, Washington, US). The traditional CCF and CCF using D-PBU methods were used for the intervention. Before the intervention, subjects were given ten minutes of practice time to acclimatize to the traditional CCF method and the CCF using D-PBU method. Each method was performed two times, with a resting time of 30 seconds. There was also a five minutes resting time between interventions to prevent carryover effects. The average value of two trials was used to analyze the data. The other researcher was blinded to the experimental circumstances during variables analysis.

For determine relative reliability in two trials, 95% confidence intervals (CIs) intra-class correlation coefficients (ICCs) was used. Standard errors of the measurement (SEM) was calculated to confirm the precision of measurement in the same unit (Kim et al, 2017a).

To analyze the data, the Statistical Package for Social Science version 23 (SPSS Inc., Chicago, IL, USA) was used. The KolmogorovSmirnov test was used to identify the normal distribution of the data. The data from this study are shown as a mean±standard deviation. The difference in muscle activity, muscle CSA, and PBU data between the two methods was compared by a paired ttest. The significance level (α) was set at .05 to confirm statistical significance. 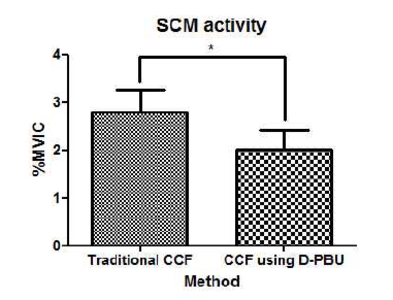 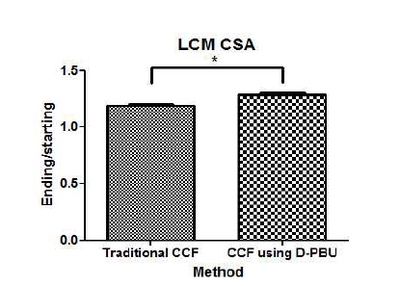 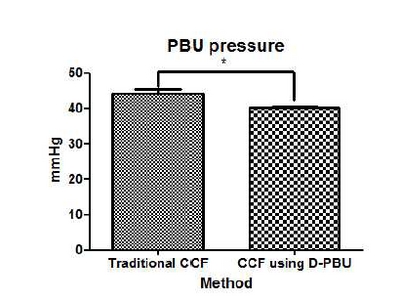 Previous studies showed that accurate CCF can be performed with the LCM and longus capitis rather than superficial neck flexors such as SCM (Falla et al, 2004; Jull et al, 2008; Jung et al, 2015). Therefore, this study compared the CSA of the LCM, the muscle activity of the SCM, and the PBU pressure between the traditional CCF method and the CCF using D-PBU method in subjects with FHP. The results showed that the CSA of the LCM was significantly larger and the muscle activity of SCM was significantly lower using the CCF using D-PBU method compared with the traditional CCF method. The traditional CCF method also had a significantly increased pressure of the PBU under the lower cervical region compared with that of the CCF using D-PBU method.

The LCM plays an important role in stabilizing the cervical spine and controlling neck posture (MayouxBenhamou et al, 1994). FHP is associated with a weakness of the deep cervical flexor muscles, such as the LCM (GriegelMoris et al, 1992). It is important to correct FHP through exercise (Harman et al, 2005). Jull et al (2009) showed that performing CCF exercise using one PBU in the upper cervical region is an effective method of activating deep cervical muscles such as the LCM. In this study, CCF using one PBU and D-PBU was compared, to detect which methods would be most effective in activating the LCM. The results showed that the CSAs proportion of LCM were 1.19±.08 and 1.28±.09, respectively, when using the traditional CCF method and CCF using D-PBU method. This means that it is more effective to use the CCF using D-PBU method than to use the traditional CCF method to activate the LCM.

The CCF movement involves the action of the LCM and longus capitis, not the action of the SCM and scalenes (Falla et al, 2003). The purpose of CCF tests has been to assess synergistic anatomical action of deep cervical muscles such as the LCM and the longus capitis muscle, rather than SCM and the anterior scalene muscles (Jull et al, 2004). These tests have shown that pure CCF does not involve the retraction of the cervical spine by superficial muscles (Chiu et al, 2005). Therefore, many studies have supervised the muscle activity of SCM by observation or palpation during CCF (Fernández-de-las-Peñas et al, 2007; Falla et al, 2003; Jull et al, 2008). To more precisely control the compensation motion by superficial muscles such as the SCM, in this study, we added one more PBU under the lower cervical region, unlike the configuration in the traditional CCF method. The resulting data (traditional CCF method: 2.79±2.32 %MVIC; CCF using D-PBU method: 2.01±1.97 %MVIC) demonstrated that the CCF using D-PBU method activated SCM less than the traditional CCF method. This means that the activity of the SCM would be restricted using the CCF using D-PBU method through obstructing low cervical region flexion or retraction by maintaining a lower cervical region pressure of PBU 40 ㎜Hg.