FHP is also known to affect respiratory function due to weakness and imbalance in the respiratory muscles [6,7]. As the head moves forward, the inhalation muscles such as sternocleidomastoid, scalenus, suboccipitalis are shortened, limiting the expansion of the rib cage This restriction of rib mobility reduces the amount of air that enters the lungs [6,8,9]. Another study analyzed the relationship between the craniovertebral angle and respiratory circulatory function, and showed that the smaller the craniovertebral angle, the less carbon dioxide emission. This result indicates that the pulmonary function in people with FHP is worse than those with a neutral head posture, thus FHP treatment is required for better pulmonary function [10].

Total twenty young university students with FHP and neck pain for more than 6 months were recruited for this study (Table 1). Inclusion criteria were who 1) had a craniovertebral angle less than 50°, 2) had some neck pain and disability, greater than 5 as measured by Korean version of the Neck Disability Index (NDI). Exclusion criteria were who 1) had a history of spinal or chest surgery 2) had a history of smoking, 3) had an acute or chronic neuromusculoskeletal pain, 4) had severe obesity (body mass index > 40), diabetes, or malignant tumors, or 5) had clinical abnormalities or severe comorbidities of the thoracic spine (nervous system, neuromuscular, cardiovascular disease, psychosis and musculoskeletal diseases) [16]. This study was approved by the Institution of Review Board of Jeonju University (approval No. jjIRB-2018-0505).

Table 1 . Descriptive characteristics of the participants.

A pulmonary function test (Pony Fx; COSMED, Rome, Italy) was used to measure the inspiration and expiration functions such as forced expiratory volume in one second (FEV1), peak expiratory flow (PEF), vital capacity (VC), and forced vital capacity (FVC) (Figure 1B). Pony Fx device composed of spirometer, main body, and a paper mouthpiece. A paper mouthpiece inserted to the end of the spirometer, then the spirometer connected to the main body to send the information of each subject’s pulmonary function. Although there is no direct validity or reliability study related to the Pony Fx, this device has been used in various studies to compare the pulmonary function before and after breathing exercise in burn patients [19] and to know the correlation between trunk flexion angle and lung capacity in a sitting position [20].

The Korean version of the NDI questionnaire was used to measure the degree of neck pain and disability in subjects with FHP. This questionnaire contains ten questions related to neck pain and its influences during daily livings such as self-management, lifting, work status, headache, etc. The participants select one of the five answer for each question and the total score is 50. When the score is high, the level of disability is severe [23]. The test-retest reliability of the NDI is excellent (ICC = 0.90) [24].

Postural correction band (Hansome, manchester, UK) used to support neck and trunk from the 7th cervical to the 7th thoracic vertebrae (Figure 1C). The straight main support bar was positioned in the midline of the trunk. The straps that run through both shoulders, lower ribs, and waist were connected to the support bar so that the upper part of the back was stretched. Due to the anthropometry for each subject was different, two different sizes (S and M) of the postural correction bands were used.

The experiment began with a sufficient explanation of entire experimental process to the subjects and they signed the consent form. Subjects worn the posture correction band for 2 hours in sitting position, and they performed interests, such as reading books, doing assignments, or operating smartphone while staying in the same position as possible. Pulmonary function test was conducted before, immediately, and 2 hours after wearing the posture correction band, and lastly immediately after removing the posture correction band. The subjects learned how perform the pulmonary function test and had a short familiarization period. After taking several cycles of normal breaths, they inhaled and exhaled as much as possible three times according to the instruction, such that, “inhale as deep as you can, and exhale for 6 seconds.” [16]. The best breathing performance was used for the statistical analysis (Figure 2). 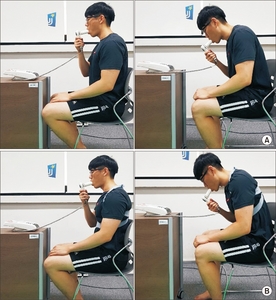 All statistical analysis was performed using R team. Kolmogorov-Smirnov test was used to test the normality of the variables obtained from pulmonary function test (FEV1, PEF, VC, FVC), and the modified Borg dyspnea scale. To know the effects of the posture correction band on pulmonary function and perceived exertion during breathing, the mixed-effect linear regression was used. We treated time (before, immediately after, 2 hours, and immediately takeoff) as a categorical variable and set each subject as random intercept. Bonferroni test was used to check the difference over time. The statistical significance level was set as α = 0.05.

1. Changes in Pulmonary Function with the Posture Correction Band Over Time

2. Changes in the Modified Borg Scale after Posture Correction Band Over Time

There was a significant difference in the evaluation of respiratory function before and after the posture correction band was worn (Figure 3). As a result of the Bonferroni post-test, the degree of discomfort immediately after the posture correction band was significantly higher than before the band (p < 0.05), but this discomfort immediately disappeared when the subjects took the band off. 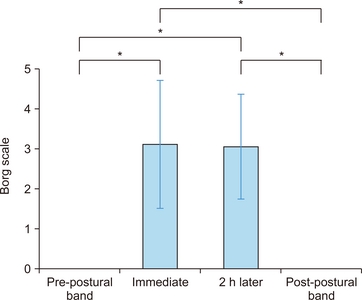