The hip muscle plays various roles; it helps control pelvic stability and leg alignment in the frontal, sagittal, and transverse planes [1]. Hip muscle strength and endurance play a significant role in injury prevention, normalizing gait patterns and posture, eliminating pain, and enhancing athletic performance [2]. Impaired hip muscle strength has been associated with various musculoskeletal disorders, such as lower back and pelvic pain, patellofemoral pain, and iliotibial band syndrome [3]. Thus, it is very important to evaluate hip muscle function to prevent musculoskeletal disorders caused due to the impairment of hip muscles.

Manual muscle strength testing is commonly used for the measure the strength of hip muscles [4]. Contrary to traditional examination, measurements such as range of motion (ROM) and strength tests are performed; functional performance tests examine how multiple body segments and systems interact [5]. Several types of functional performance tests are used to assess patients with various lower extremity injuries. These may be categorized into movement, hop/jump, balance, and agility tests [6].

The star excursion balance test (SEBT), the Y-balance test, single-leg squat, and single-leg stance were used to test the lower extremity function. In addition, a single-leg hamstring bridge (SLHB) test is used to predict hamstring injury in sports players. The SLHB test is a simple clinical test for assessing the hamstring strength using repetitive hip and knee movements [7]. Although there is the SLHB test for the measurement of the hamstring strength, a simple clinical test for assessing hip muscles strength is needed. This is because, the hip muscles play an important role in forming a kinetic chain by connecting the lower extremities, the thigh and the pelvis. Thus, testing the hip muscle function is important to test the performance of the spine, pelvis, and leg during bridging exercises.

In the upper extremity, there is a closed kinetic chain upper extremity stability (CKCUES) test that evaluates the quantitative data (score) for an upper-extremity task in a closed kinetic chain within time [8]. However, for assessing hip muscle function, there is no performance test that evaluates data on lower limb movements in a closed kinetic chain within time, as in the CKCUES test. Thus, we designed a novel functional performance test tool, which we named close kinetic chain dynamic lower extremity stability (CKCLE) test to assess hip muscle function. The single-leg bridge exercise has been used to improve hip muscle function [9]. A test was devised to count the number of repetitively performed motions with opposite side hip external rotation, adduction, and extension for touching the supporting knee with the moving leg heel while maintaining the single-leg bridge position for 20 seconds. The CKCUES test had an evaluation time of 15 seconds [8], but it was considered that lower extremity muscles are more powerful than upper extremity muscles. In addition, when 30 seconds was used to evaluate the CKCLE test time, subjects felt the muscle fatigue at the first CKCLE test. Considering these reasons, the CKCLE test time was set to 20 seconds. Therefore, the purpose of this study was to determine the relationship between performance of CKCLE test and strengths of hip extensor, external rotator, and abductor muscle.

We used the G*power program to determine the sample size using the pilot data. The necessary sample size of 22 was calculated from pilot study data of 8 subjects, with a power of 0.80, alpha level of 0.05, and effect size of 0.838. Therefore, 22 volunteers participated in this study (13 males and 9 females). To be included in the study, subjects had to meet the following criteria: 1) no prior history of unresolved pain, injury, or surgery to either hip, knee, or ankle; and 2) currently not taking any prescribed medication for pain [10]. The study procedures were explained prior to testing, and each subject provided informed consent. The study was approved by the Yonsei University Mirae Institutional Review Board (approval No. 1041849-202002-BM-023-01).

The hip extensor, external rotator, and abductor muscle strengths were measured using a Smart KEMA strength sensor (KOREATECH Co. Ltd., Seoul, Korea) (Figure 1). The tension gauge was 3 kg in the starting position to control the tension of the belt in each test position. Isometric strength measurements at both legs were performed twice for 5 s under three conditions: (1) hip extension, (2) hip external rotation, and (3) hip abduction. The force signals were measured and transferred to an electronic tablet device (Galaxy Tab A6 10.1; Samsung Inc., Seoul, Korea) via Bluetooth device connection and analyzed with the Smart KEMA application software (KOREATECH Co. Ltd.). The value was calculated as the average of the values for 3 seconds within the 5 seconds. The mean values of the two trials were used for data analysis. 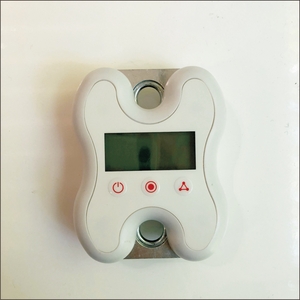 The strength of the hip extensor muscle was measured in the prone position with 0° hip flexion and 90° knee flexion. A strap was attached to the distal femur of the subjects. The tension of the belt was adjusted for each subject with hip extension at 0° (Figure 2). To measure the maximum isometric force of hip extension, subjects were instructed to extend their hip and pull the line with maximum effort, without lumbar extension for 5 seconds. 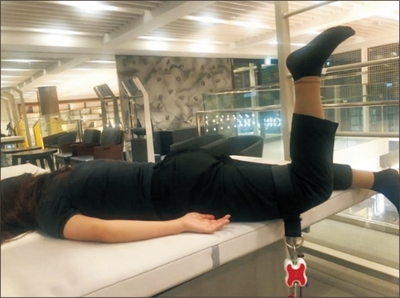 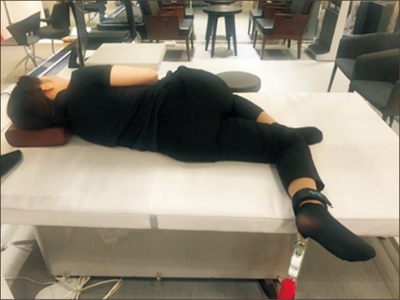 The strength of the hip abduction muscle was measured in the supine position with 0° hip abduction. A strap was attached to the ankle. The tension of the belt was adjusted for each subject with hip abduction at 0° (Figure 4). To measure the maximum isometric force of hip abduction, subjects were instructed to abduct their hip and pull the line with maximum effort for 5 seconds without hip flexion and knee flexion. 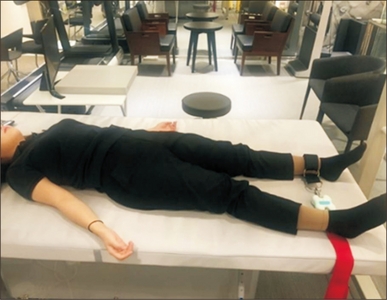 To begin, the subjects assumed a bridge position, with the knee flexed 135°. The feet were positioned directly over the knees (Figure 5A). When the examiner said “go,” the subjects performed the CKCLE test by moving one leg from the floor, touching the opposite knee as in performing hip external rotation, adduction, and extension (Figure 5B); then replacing the leg on the floor while maintaining the bridging position (Figure 5C). A single test consisted of continuing this alternating procedure for 20 seconds. Subjects attempted as many “touches” as possible in the allotted time during the maximal tests. One cycle of touch was defined as “when the heel of the moving leg touched the opposite knee and returned to the ground while maintaining the bridging position.” The target bar was used to equally control the position of the pelvis, not to drop their buttocks on the floor during the test. Continuous feedback was provided not to drop the buttocks to the floor during the CKCLE test. The caution was given if the pelvic dropped from the target bar, and the test was stopped when the pelvic was not at the target bar despite the caution. Before the test, the subjects had sufficient practice. The examiner counted the number of repeated movements during the test.

The data were analyzed using PASW version 18.0 (IBM Co., Armonk, NY, USA) for Windows. The Kolmogorov-Smirnov test was used to verify that the data were normally distributed. Intra-class correlation coefficients (ICCs) with 95% confidence intervals (CIs) were used to determine the intra-reliability of the Smart KEMA strength sensor and CKCLE test. The correlation between the hip muscles (extensor, external rotator, and abductor) strengths of the supporting leg and performance of CKCLE tests was determine using the Pearson correlation. Mukaka [11] suggested threshold values of 0.0–0.3, 0.3–0.5, 0.5–0.7, 0.7–0.9, and 0.9–1.0 for negligible, low, moderate, high, and very high correlation coefficients, respectively. In all analyses, p < 0.05 was considered to statistically significant.

Table 1 . Characteristics of the subjects.

Table 3 . Pearson’s correlation coefficients between the CKCLE test and the hip muscles strength.

The reason of the positive correlation between the strength of hip extensor muscle and performance of CKCLE test is as follows: CKCLE test was designed based on the single-leg bridge exercise. The single-leg bridge exercise activated 51% of gluteus maximus maximal voluntary isometric contraction in a previous study [2]. In addition, we controlled the position in knee flexion at 135°. A previous study suggested that position in knee flexion 135° during one leg bridge could facilitate the gluteus maximus more than hamstring muscles [2]. Although we did not measure activity of the gluteus maximus and hamstring, it is possible that gluteus maximus may be more recruited than hamstring while assessing the CKCLE test.

For another lower extremity functional tests, the SEBT and the Y-balance tests have been used frequently to assess dynamic postural control with unilateral weight-bearing conditions. Hubbard et al. [13], investigated that hip extensor muscle strength correlated with the posterior-medial (r = 0.48, p < 0.05) and posterior-lateral areas (r = 0.49, p < 0.05). Other studies have shown that ankle dorsiflexion, knee flexion, and hip flexion ROM were associated with Y-balance test and SEBT numbers [6,14,15]. Thus, although it is difficult to directly compare with other tests, the CKCLE test could be more suitable for selectively evaluating the function of hip muscle strength than other measurement tools.

This study has several limitations. The test was not evaluated to patients or various age groups. Therefore, this result cannot be generalized to all subjects. In addition, it is necessary to compare the performance of CKCLE test in subjects with normal and weak strength of hip muscle, and to determine whether performance of the CKCLE test improves after strengthening the hip extensor and external rotator muscles.