Core strength is defined as an internal stabilization achieved by isometric contraction of lumbopelvic hip complex of the body [1]. This complex includes the abdominal structures, lumbopelvic region, hips, and proximal lower limbs [1]. The main function of this complex may create stabilization for the generation of motion and force in the distal joint [1,2]. Improved core strength may be helpful to manage lower back pain [3], improve body balance [4], and prevent musculoskeletal impairments [5,6]. Weakness and poor core strength may lead to injuries of the lower extremities and low back pain [5,7]. Therefore, core strength is important for rehabilitation of the lower extremities and athletic performance [8,9].

The iliopsoas, one of several hip flexor muscle group, contributes to lumbopelvic stabilization during active straight leg raising (ASLR). Thus, it is an important muscle group surrounding the hip joint [10]. The weakness of iliopsoas may result in uncontrolled movement in the lumbopelvic region [11] or anterior glide syndrome in the hip joint during ASLR [3]. Therefore, accurately assessing these compensatory mechanisms can be vital to interpreting and objectively evaluating hip flexor functions [12]. In previous study, the lumbopelvic compensation during ASLR was minimized by various methods including external compression belt in abdominal region [13] and pelvic rotatory control [14].

Among the hip muscle groups, isometric hip flexor strength has generally been assessed with subjects in the supine [15-17] and sitting positions [18]. Hip flexion in the supine position is a functional movement for assessing performance of the hip flexor muscles [15]. Sufficient isometric core strength in the supine position can contribute to improved hip flexor strength because the strength of distal extremity may need the proximal stability of the lumbopelvic region [3,11]. In addition, the lumbopelvic region can be stabilized either internally or externally [16]. An internal stabilization can be achieved by maintaining a body segment with isometric contraction of the adjacent muscles. An external stabilization can be achieved by manually maintaining a body segment with therapeutic straps, or the therapist’s hands [16]. Non-elastic belts are also used to externally maintain the abdominal and lumbopelvic region while subjects performed hip flexion against resistance in the supine position [16]. Most of previous studies have been performed with various stabilizing methods in healthy subjects [10,16].

The findings of this study may provide insights regarding clinical techniques that can be used to test isometric hip flexor strength with considering WICS.

A total of 34 subjects were recruited for this study (16 subjects with WICS and 18 subjects without WICS). The general characteristics for the subjects were summarized in Table 1. G*Power (ver. 3.1.2; Franz Faul, University of Kiel, Kiel, Germany) was used to determine the sample size based on a pilot study of five participants. A pilot study was performed to investigate the independent variables such as hip flexor strength in the supine position. The sample size was calculated with a power (0.80), an alpha (0.05), and an effect size (0.94). The sample size for the study was required seventeen participants. Inclusion criteria were no limitations in hip flexion range of motion and no impairments of the hip joint or lumbopelvic region. Exclusion criteria were a history with surgery in the hip joint and lumbopelvic region with neuromuscular or musculoskeletal aspects within the previous 3 years as well as pain in any part of the body during tasks. The experimental protocols were explained to all subjects in detail, who provided written informed consent and ethical principles of the Declaration of Helsinki (No. 1041849-201603-BM-015-01).

The isometric maximal voluntary contraction strength of the hip flexor muscles was measured by using a tensiometer (Smart KEMA Pulling Sensor; Factorial Holdings, Seoul, Korea). The strap of the pulling sensor was positioned at 10% of the femur length from the patella. To minimize regional differences, the same region on the skin was marked with a straight line [19]. The strap length was adjusted to ensure that each hip angle reached 90° in the supine position. Then each task was repeated using the same procedure after 2 minutes of rest. All examiners were familiarized with pulling sensor before actual measurements began [19]. The tensiometer consisted of a force-detecting system with measurement forces of up to 100 kg, 0.1 kg accuracy, and 0.1 kg resolution. Before any measurements were made, all subjects warmed up with submaximal-speed jogging for 5 minutes to prevent discomfort or pain during exercises [20].

Each subject was familiarized with 90° hip flexion in the supine position both with and without an external support. The examiner supervised each subject during all exercises. This measurement was randomized within each test session.

All subjects assumed a supine position on the table. Subjects were asked to perform hip flexion without an external support; for the same task with an external support, a non-elastic belt was applied to subjects’ abdominal and lumbopelvic regions to provide external stability in the lumbopelvic region [16,19]. During measurements, the knees of tested limbs performed 90° hip flexion, and the knees of non-tested limbs were straightened at rest on a table during isometric maximal voluntary contraction [19]. The duration of contractions was approximately 5 seconds. Measurements were made three times, with 2 minutes of rest time between trials to prevent fatigue. The maximal strength with the tensiometer (in kg) was recorded.

The double-bent leg-lowering test was used according to the recommendation of Comerford and Mottram [11,19], to classify subjects with and without WICS. A pressure biofeedback unit (PBU) was positioned on the lumbopelvic region. Subjects were asked to assumed a crook-lying position. The pressure of PBU was adjusted to 40 mmHg. The Subject was asked to maintain the PBU at 40 ± 10 mmHg, without holding their breath, while moving their legs. They were asked to maintain PBU at 40 mmHg with hip flexion at 90° for 5 seconds and with the heels held immediately above the table for 5 seconds [19]. Specifically, they were asked to dissociate movement through the range of bilateral hip flexion from 90° to 45° while maintaining PBU pressure. Individuals who could maintain the PBU pressure below ±10 mmHg were included in the group of subjects without WICS [19]. Subjects with WICS were defined as those who exhibited a pressure difference ±10 mmHg in the lumbopelvic region [11,19].

The one-sample Kolmogorov–Smirnov test was used to determine whether the measurement data had a normal distribution. The isometric strength of the hip flexors was compared with two-way mixed analysis of variance between the two groups (with vs. without WICS: a between factor) for hip flexion (with vs. without an external support: a within factor). Statistical significance was set at α = 0.05. If a significant interaction was confirmed between an external support or groups, simple effects were determined with the Bonferroni correction (α = 0.05/4 = 0.0125). To assess effect size of an external support according to each group, we calculate the Cohen d using mean ± standard deviation for the hip flexor strength with and without an external support. Cohen’s d values > 0.8 reported a strong effect, > 0.4–≤ 0.8 indicated a moderate effect, and ≤ 0.4 was rated as weak effect [6-8]. SPSS for Windows (ver. 18.0; IBM Co., Armonk, NY, USA) was used for statistical analyses.

In subjects with WICS, isometric hip flexor strength in the supine position was significantly greater with an external support than without it (Table 2, Figure 1). In subjects without WICS, no statistically significant differences were found in isometric hip flexor strength regardless of an external support (Table 2, Figure 1).

Table 2 . The hip flexor strength in the group with and without WICS. 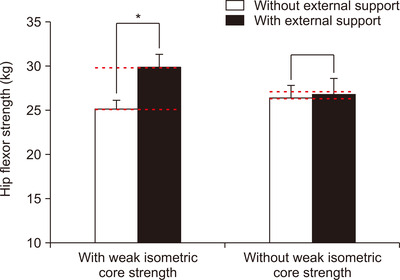 Isometric hip flexor strength can be helpful to treat chronic lower back pain and improve the performance of the hip joint [5,7,15,22]. However, in most clinical settings, it is not commonly considered with WICS. Moreover, a lack of consideration regarding WICS may result in inappropriate training of target muscles in subjects with WICS [3]. This study compared isometric hip flexor strength in the supine position in subjects with and without WICS.

There are two potential explanations for the contribution of WICS to differences in isometric hip flexor strength based on an external support. First, biomechanical elements may be at play. Proximal stability during lower extremity exercise can facilitate interactions of the iliopsoas and rectus femoris muscles with the spine and pelvis [23,24]. In this study, the abdominal and lumbopelvic regions were externally stabilized with non-elastic belts while subjects with and without WICS performed isometric hip flexion against resistance. Note that in subjects with WICS, this external support may have contributed to the improvement of WICS, resulting in sufficient proximal stability for isometric hip flexor strength. By contrast, no significant differences in isometric hip flexor strength were found regardless of an external support, because subjects without WICS may already have sufficient core strength against resistance. Therefore, the external support may have improved WICS by fixing the lumbopelvic region during the hip flexion task in this study.

This study has several limitations. First, surface EMG was not used for muscle activation during hip flexion because the non-elastic bands used for an external support in this study concealed the attachment site and caused the cross-talk. Therefore, further studies are needed to investigate by surface EMG contractions of lumbopelvic muscles during hip flexion in the supine position. Second, because healthy subjects participated in current study, the findings cannot be generalized to different age groups or patients with lower back pain. Further studies are needed to compare isometric hip flexor strength between elder generation and patients with lower back pain. Third, not all hip flexor muscles (e.g., tensor fascia lata and rectus femoris) were fully investigated. Finally, the hip flexor strength measurement was not selective method of the iliopsoas.

This work was supported by the National Research Foundation of Korea (NRF) grant funded by the Korea government (MSIT) (No. 2017R1C1B5076172).