The wall squat is considered an effective exercise because it can reduce the knee load and prevent excessive lumbar movement. However, the relationship between wall squat performance and strength of knee extensors and hip extensors remained unclear.

Squats are used to increase lower-body muscle strength, and are among the most common exercises performed by the general public and athletes (Escamilla et al, 2001;,Fry et al, 2003;,Mccurdy et al, 2005). Among closed kinetic chain exercises, squats particularly activate the knee extensors and hip extensors, and thus are effective for stabilizing the hip and knee joints (Earl et al, 2001;,Stiene et al, 1996). Squat exercises can vary in depth (partial squats: 40˚ knee angle, half squats: 70 to 100˚, and deep squats: greater than 100˚), as well as in the intensity of load, foot placement and position (conventional squats, single-leg squats and wall squats).

The conventional squats can increase the patellofemoral compression force and stress (Escamilla et al, 2009) as well as lumbar flexion (Noyes et al, 1984;,Paoli et al, 2009;,Schoenfeld, 2010). They may also increase the risk of muscle ligamentous sprains, disc herniation and spondylolysis (Matsumoto et al, 2001;,Vakos et al, 1994). However, wall squats can reduce these risks. Wall squat exercise involves sliding up and down against a wall. Because the wall squat is performed with the bodyweight on the wall, it is easy to perform this exercise as a beginner and to control the patellofemoral compression force and stress. The wall squat also has the advantage of preventing excessive lumbar flexion and extension.

Kim (2012) reported the activity of the quadriceps muscle during wall squats [vastus medialis obliquus: 87.2% of maximal voluntary isometric contraction (MVIC); rectus femoris: 52.3% of MVIC; and vastus lateralis: 89.3% of MVIC]. The average gluteus maximus muscle activity was 17.6% of the MVIC in males and 20.4% of the MVIC in females during wall squats (Bolgla et al, 2014). In the previous study, the majority of the studies on electromyography (EMG) during walls squat were conducted. Schoenfeld (2010) reported the importance of lower extremity strength for squat exercises and Kim et al (2015) reported the relationship between squat depth and lower extremity strength and range of motion. However, the relationship of wall squat performance with knee extensor and hip extensor strength remained unclear. Thus, the purpose of this study was to compare the strengths of the knee extensors and hip extensors between groups with low and high wall squat performance. We hypothesized that the knee extensor and hip extensor strength would be different depending on ability of wall sqaut performace.

The subjects were instructed about wall squat exercise and had a familiarization session of 5 minutes prior to evaluation session. For the wall squat exercise, the subjects stood against a wall with their legs shoulder-width apart, with 135-degree knee flexion and a neutral ankle position. The pelvis and the lumbar spine were in the neutral position and the hands were crossed over the chest (Figure 1A, 1B). The wall squat exercise used a modified Cho (2013) method to accurately control the posture and time. During the wall squat motion, the knees were flexed to an 80-degree angle (Figure 1C, 1D) from the 135-degree starting position, without heel elevation, during a 5-second descent; the full-squat position was held for 5 seconds; and the knees were extended back to a 135-degree angle (Figure 1A) during a 5-second ascent. This was counted as one cycle of a wall squat. We used a mobile phone application (Clinometer level and slope finder, Plaincode Software Solutions, Stephanskirchen, Germany) to measure the start (Figure 1B) and full-squat positions (Figure 1D), and placed a target bar just below the ischial tuberosity at the end position (Figure 1D). The Metronome Beats application (Metronome Beats, Stonekick, London, England) was used to control the descent, full-squat maintenance and ascent times.

Knee extensor and hip extensor strength were measured on a SMARTKEMA strength system with a load cell sensor (Relive Inc., Gimhae, Korea). For the measurement of knee extensor strength, the subject was seated at the edge of the therapeutic table, with 90-degree knee flexion and 90-degree hip flexion. The subject was told to stabilize himself by holding the side of table with his hands and maintaining an upright sitting posture. A glass suction cup on the floor was attached to a restraining belt, which was tied to the subject’s ankle to limit the vertical direction of knee extension. The length of the belt was adjusted so that the subject could extend the knee 45 degrees (Figure 2A). The subject performed isometric movements by extending the ankle against the strap anchored by the glass suction cup and maintaining the maximum voluntary isometric contraction for 5 seconds. 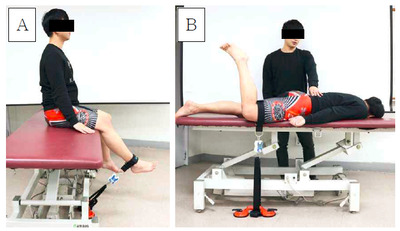 For the measurement of hip extensor strength, the subject lay on the table in a prone position with knee flexion while his leg was slightly off the side of the table. A thigh strap was tied to the femur, 2 ㎝ above the popliteal fossa. The length of the belt was adjusted so that subject’s leg would be in the position of 5-degree hip extension (Figure 2B). The examiner stabilized the rotation of the lumbar vertebra during hip extension. The subject exerted a 5-second maximum voluntary isometric contraction twice against the strap. The mean values of the middle three seconds were averaged to generate the mean MVIC values.

Statistical analyses were conducted with SPSS ver. 22.0 (SPSS Inc., Chicago, IL, USA). The Kolmogorov-Smirnov test was used to confirm that the data were normally distributed. An independent t-test was used to compare the strengths of the knee extensors and hip extensors between the low and high wall squat performance groups. A value of p<.05 was taken to indicate statistical significance. 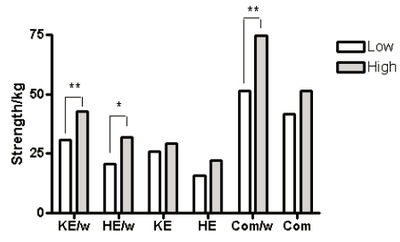 The wall squat exercise involves descending to a full-squat position (80-degree knee flexion) and ascending to the initial position (135-degree knee flexion). Previous studies (Cheron et al, 1997;,Dionisio et al, 2008;,Escamilla et al., 1998;,Flanagan et al, 2003) have shown that quadriceps activation is high in the descending section of the squat. Kim (2012) reported the activation of the vastus medialis obliquus (87.21% of MVIC), rectus femoris (52.34% of MVIC) and vastus lateralis (89.37% of MVIC) during wall squats. In the ascending section of the squat, activation of the GM was 56-86% of the MVIC (Ayotte et al, 2007). Therefore, for successful squat performance, knee extensor and a hip extensor strength will be required. In this study, the differences in the knee extensor and hip extensor strength-to-bodyweight ratios between the low and high wall squat performance groups were significant (knee extensors: p=.002, hip extensors: p=.038). The wall squat is a closed kinetic chain exercise that combines various movements, including knee extension and hip extension (Dionisio et al, 2008). Although the individual strengths of the knee extensors and hip extensors depending on weight are important, the combined strength of the two is also important for successful squat performance, because it is difficult to perform a squat successfully with only one of these strengths. Thus, composite strength values that combine knee extensor and hip extensor strength should also be considered. In this study, there was a significant difference in the normalized composite value by weight between the two groups (p=.003).

There were several limitations to the current study. Firstly, we only considered the knee extensors and hip extensors, and did not investigate the activities of other muscles that also may have affected ankle control, such as the ankle dorsiflexors and ankle plantarflexors. Secondly, we did not investigate hip, knee and ankle kinematics during the wall squats, although the joint angles were controlled. Future studies need to be conducted to evaluate hip, knee and ankle kinematics during wall squats for the purpose of investigating asymmetrical movement. Thirdly, only healthy and relatively young subjects (21∼32 years old) were recruited for our study. Thus, our findings cannot be generalized to individuals with lumbar dysfunction or to other patient populations. And this study was a cross-sectional study. Muscle strength was improved by exercise over 4 weeks, and in a study of Bazyler et al (2014), a squat exercise for 8 weeks or more was reported to improve RM. Therefore future studies need to be evaluated to long term effects of wall squat exercise.