Background: Only 2% of falls in older adults result in serious injuries (i.e., hip fracture). Therefore, it is important to differentiate injurious versus non-injurious falls, which is critical to develop effective interventions for injury prevention.
Objects: The purpose of this study was to a. extract the best features of surface electromyography (sEMG) for classification of injurious falls, and b. find a best model provided by data mining techniques using the extracted features.
Methods: Twenty young adults self-initiated falls and landed sideways. Falling trials were consisted of three initial fall directions (forward, sideways, or backward) and three knee positions at the time of hip impact (the impacting-side knee contacted the other knee (“knee together”) or the mat (“knee on mat”), or neither the other knee nor the mat was contacted by the impacting-side knee (“free knee”). Falls involved “backward initial fall direction” or “free knee” were defined as “injurious falls” as suggested from previous studies. Nine features were extracted from sEMG signals of four hip muscles during a fall, including integral of absolute value (IAV), Wilson amplitude (WAMP), zero crossing (ZC), number of turns (NT), mean of amplitude (MA), root mean square (RMS), average amplitude change (AAC), difference absolute standard deviation value (DASDV). The decision tree and support vector machine (SVM) were used to classify the injurious falls.
Results: For the initial fall direction, accuracy of the best model (SVM with a DASDV) was 48%. For the knee position, accuracy of the best model (SVM with an AAC) was 49%. Furthermore, there was no model that has sensitivity and specificity of 80% or greater.
Conclusion: Our results suggest that the classification model built upon the sEMG features of the four hip muscles are not effective to classify injurious falls. Future studies should consider other data mining techniques with different muscles.

Osteoporotic hip fractures are common in individuals aged over 65, and 90% of them are caused by falls [1]. Furthermore, 20% of hospitalized older adults die within a year, and 50% of them suffer from permanent disabilities [2,3]. However, only 1%–2% of falls end up with hip fractures, and this suggests there exist factors that differentiate injurious versus non-injurious falls [4]. If injurious falls are characterized and classified, effective interventions (i.e., exercise programs) could be developed for fall-related hip fractures in older adults.

A risk of hip fracture during a fall is defined as a ratio of the applied force to the fracture strength of the femur. When the applied force becomes greater than the femoral strength during impact, the fall becomes injurious to cause a hip fracture, and several factors have been suggested to determine the injurious falls. Researchers have shown that the hip fracture risk is affected by knee positions at the time of hip impact, and hip impact force becomes 59% greater when the contacting-side knee is free of constraint (i.e., not touching the floor and the contralateral knee) [5,6]. Furthermore, the hip fracture risk increases ten-fold when the fall initiated backward and landed sideways [7].

Efforts have been made to classify and characterize falls using sensors and machine learning algorisms [8,9]. Different sensors like accelerometer, surface electromyography (sEMG), pressure sensors and inclinometer have been used, but the accelerometer is the most common due to its convenience and versatility (i.e., light, small and easy to wear during movements) [10-12]. However, the acceleration data are limited to differentiate active versus passive movements, and Roy et al. [13] showed its limitation in distinguishing motion of riding a stationary bike and sitting still. In contrast, sEMG can distinguish active and passive movements, and used for gesture recognition, gait analysis, and limb prosthetic control [14-16]. Furthermore, Xi et al. [17] reported 98.7% of sensitivity and 98.6% of specificity in classifying activities of daily living and falls using sEMG.

sEMG collects electrical signals when muscles develop forces [18], and useful information may be extracted from the sEMG signals in time, frequency, or time-frequency domain [19]. However, the frequency and time-frequency domain are not suitable to a real-time pattern recognition due to the complexity of computation [20]. In contrast, sEMG data in time domain can be used easily and fast because no additional processes (i.e., transformation) are required, and the following extracted features are suggested in literature: Average Amplitude Change (AAC) [15], Difference Absolute Standard Deviation (DASDV) [15,21], Integral of Absolute Value (IAV) [9,22,23], Mean Amplitude (MA) [23,24], Number of Turns (NT) [23], Root mean square (RMS) [21,24], Variance (VAR) [9,22,25], Wilson Amplitude (WAMP) [22], Zero crossing (ZC) [23,26]. These features have been used in the field of pattern recognition (i.e., controlling of a prosthetic upper extremity, daily activity monitoring and fall detection) [9,15,21-24,26].

Selection of appropriate data mining techniques in pattern recognition is the most important to increase the model accuracy. Xi et al. [17] have used Gaussian kernel support vector machine (also called as a radial basis function support vector machine) to classify 8 activities including 7 daily activities and 1 fall, and showed 96.4% of model accuracy. Keleş and Subaşı [27] have used a decision tree algorithm to classify muscle activity of individuals with myopathy and neuropathy, and showed 99.3% of model accuracy.

Against the background, we first extracted features from sEMG of four hip muscles during a fall, and then developed and evaluated models to classify injurious falls using the decision tree and support vector machine (SVM) algorithms based on the extracted features. We hypothesized that the accuracy of our created model would be greater than 80%.

Lower extremity sEMG data published in our companion paper [28] were used as secondary data for this study. While the companion paper reported results of eighteen samples, we included all twenty individuals (10 males and 10 females). Participants’ body weight and height averaged 64.9 ± 11.7 kg and 166.8 ± 7.3 cm, respectively. Participants self-initiated falls and landed sideways. Falling trials were acquired with three knee positions at the time of hip impact (the impacting-side knee contacted the mat (“knee on mat”) or the contralateral knee (“knee together”), or neither the mat nor the contralateral knee contacted the impacting-side knee (“free knee”), and with three initial fall directions (forward, backward, or sideways) (total falling condition: three knee positions X three initial fall directions) (Figure 1). Each participant fell three times for each falling condition. During falls, activity of the iliopsoas, gluteus maximus and medius, and adductor longus were recorded from the EMG electrodes placed on the belly of the muscles. In this study, injurious falls were defined as falls involved “free knee”, or “backward initial fall direction” based on two previous studies - Lim and Choi [6] and Yang et al. [7], respectively. 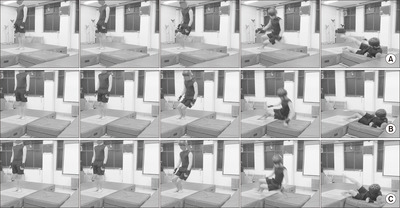 The sampling rate of sEMG signals was 3,000 Hz and the collected EMG signals were filtered with 10 Hz of high-pass filter and 1,000 Hz of low-pass filter. Time to onset was set as follows:


(where, RMS = Root mean square value of raw signal during a fall with time window 50 msec)

The first 600 milliseconds (1,800 frames) from the onset time were used for the feature extraction. Nine features of the time domain of the sEMG signal were extracted to generate the input variables to be used in fall classification, and the features were described in Table 1. Abbreviations used for each feature are as follows: (N = number of the sample, I = i-th sEMG signal, u(x) = unit step function, T = threshold). All sEMG features were computed by using Matlab routines (Matlab R2019b; MathWorks Inc., Natick, MA, USA).

Table 1 . Abbreviation of extracted feature from the signal of EMG.

VAR is often used as a power index of sEMG [9,22,25], and similar with an equation of the variance. VAR is expressed as follows:

WAMP means the number of times the amplitude of two consecutive signals exceeds a pre-defined threshold (T; in this study 10 mV) [22]. WAMP is expressed as follows:

ZC means the number of times the amplitude of two consecutive signals passes through a value of zero [23,26], and is expressed as follows:

NT is the number of times the amplitude of three consecutive signals changes from positive to negative [24]. NT is expressed as follows:

RMS is one of the features commonly used in sEMG signal analysis [21,24], and is expressed as follows:

AAC is similar with MA feature except averaging [15]. AAC is expressed as follows:

DASDV is similar with RMS and is like a standard deviation of MA mathematically [15,21]. DASDV is expressed as follows:

The support vector machine is an algorithm that finds the optimal hyperplane of classification which distinguishes classes of data. “Kernel trick” is a method of classifying what cannot be classified at the original dimension, by interpreting data as a high-level feature space. Support vector machine uses the kernel tricks in different ways (i.e., polynomial kernel, sigmoid kernel, Gaussian kernel), and Gaussian kernel is common due to superior performance. Therefore, Gaussian kernel trick has been used to pattern recognition of human movement [17,29].

The decision tree is a classifier used a lot in datamining [30-33]. The decision tree consists of nodes and branches to classify data based on split criteria. Entropy index, Gini index, and chi-square of significance are used for the split criteria of decision tree and entropy and Gini index are commonly used. Based on the pre-determined criteria, machine learning proceeds in the direction of increasing purity and decreasing impurity of variables. In this study, two models were created by decision tree:

For the initial fall direction, accuracy of the best model (SVM1 with a DASDV feature) was 48%, and the worst model (DT2 with a MA feature) was 22% (Figure 3A).

Table 3 . Sensitivity and specificity of models classifying knee position at the time of hip impact.

The purpose of this study was to find a best model to classify injurious versus non-injurious falls using sEMG data of hip muscles during a fall, and the injurious falls were defined based on previous studies, where a. the risk of hip fracture increases 10 times when falls initiated backward and landed sideways [7], and b. hip impact force increases 60% (thereby hip fracture risk increases) when the impacting-side knee is free of constraint (“free knee” – neither the ground nor the contralateral knee contacts the impacting-side knee) at the time of hip impact [6]. We found that classification of initial fall direction through sEMG of hip muscles was not promising, and the accuracy of the best model was less than 50%. Moreover, classification of knee position at the time of hip impact was not encouraging, either, and the best model provided 49% of accuracy at most. A potential reason for this poor performance may include target muscles that inappropriate to differentiate injurious versus non-injurious falls. In our experiment, it was difficult to identify EMG onset from the four hip muscles, and considerable number of trials needed to be excluded from data set. However, a previous study that used Gaussian kernel support vector machine showed that a model used sEMG data of the gastrocnemius and tibialis anterior muscles pretty successfully classified activities of daily living versus falls, providing 98.7% of sensitivity and 98.6% of specificity [17]. Therefore, future studies should consider other muscle groups (i.e., trunk muscles) along with different data mining techniques to generate the best model for classification of injurious versus non-injurious falls using sEMG data during a fall.

There are limitations in this study. sEMG data we used for model development were acquired when young adults mimicked older adults’ falls in laboratory environment. Therefore, our results should be interpreted in light of these limitations.

This is the first study that used data mining techniques to classify injurious versus non-injurious falls using sEMG data of lower extremity muscles during a fall. While classifying models developed in this study showed poor accuracy, the results of this study should provide baseline information, which help guide the design of future study.

While it is important to differentiate injurious versus non-injurious falls, limited efforts have been made. To address this issue, we developed classification models based on data mining techniques. However, our results suggest that the classification model built upon the sEMG features of the four hip muscles are not effective to differentiate injurious vs non-injurious falls. Future studies should consider different muscles along with other data mining techniques.