This is an Open Access article distributed under the terms of the Creative Commons Attribution Non-Commercial License (http://creativecommons.org/licenses/by-nc/4.0) which permits unrestricted non-commercial use, distribution, and reproduction in any medium, provided the original work is properly cited.

Background: Considering the kinetic chain of the lower extremity, a pronated foot position (PFP) can affect malalignment of the lower extremity, such as a dynamic knee valgus (DKV). Although the DKV during several single-leg movement tests has been investigated, no studies have compared the differences in DKV during a single-leg step down (SLSD) between subjects with and without PFP.
Objects: The purpose of this study was to compare the DKV during SLSD between subjects with and without PFP.
Methods: Twelve subjects with PFP (9 men, 3 women) and 15 subjects without PFP (12 men, 3 women) participated in this study. To calculate the DKV, frontal plane projection angle (FPPA), knee-in distance (KID), and hip-out distance (HOD) during SLSD were analyzed by two-dimensional video analysis software (Kinovea).
Results: The FPPA was significantly lower in PFP group, compared with control group (166.4° ± 7.5° and 174.5° ± 5.5°, p < 0.05). Also, the KID was significantly greater in PFP group, compared with control group (12.7 ± 3.9 cm and 7.3 ± 2.4 cm, p < 0.05). However, the HOD not significantly differed between two groups (12.7 ± 1.7 cm and 11.4 ± 2.5 cm, p > 0.05).
Conclusion: The PFP is associated with lower FPPA and greater KID. When assess the DKV during SLSD, the PFP should be considered as a crucial factor for occurrence of DKV.

An excessive pronated foot position (PFP) is characterized by partial or complete loss (collapse) of the medial longitudinal arch [1,2]. Considering the kinetic chain of the lower extremity, a PFP can produce medial tilting of the tibia with navicular drop and rearfoot eversion, and has frequently been described as a risk factor for medial tibial stress syndrome or patellofemoral pain syndrome [3-5]. Moreover, a PFP is associated with greater dynamic knee valgus (DKV) during functional movement tests, such as single-leg squat and jump landing [6]. DKV which can produce abnormal joint moment during weight bearing activities is a predisposing factor for non-contact knee injuries, comprising of a combination of hip adduction and internal rotation, knee abduction, and ankle eversion [7,8]. Accordingly, when assessing patients with DKV during functional movement tests, measuring not just DKV but also PFP should also be considered to reduce the risk associated with knee injuries or when planning a rehabilitation program.

Several investigators have measured DKV in the frontal plane by using two-dimensional (2D) video analysis [13,14]. The frontal plane projection angle (FPPA) of the knee has been widely used to calculate the DKV as an angular value [9,10,12,15] (Figure 1). Moreover, DKV is a complex phenomenon affected by the relative alignments of both knee-in and hip-out. Therefore, when analyzing DKV using 2D images, both medial knee displacement and lateral pelvic displacement should be simultaneously considered (Figure 2). Kagaya et al. [6] suggested that the knee-in distance (KID) should represent the medial knee displacement and hip-out distance (HOD) should represent the lateral pelvic displacement. According to this earlier study, increased KID and HOD values indicate greater DKV values. 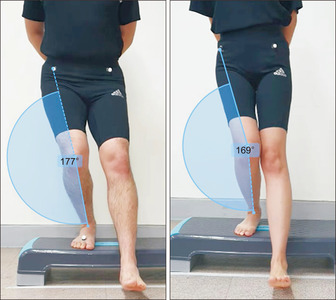 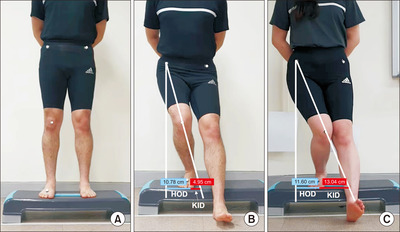 For this cross-sectional study, 30 volunteer subjects (24 men and 6 women) were recruited from the university campus. Three subjects who could not perform the experimental protocol owing to pain in the lower extremities (at the knee joint in two subjects, at the ankle joint in one subject) were withdrawn. Accordingly, 27 subjects (21 men and 6 women) participated in this study. The foot position of the subjects was confirmed using the foot posture index (FPI), which is reported to be a quick and simple tool for assessing different foot positions [16]. Based on the FPI scores, 15 subjects (12 men and 3 women) were classified into the control group with a score of 0 to +5, and 12 subjects (9 men and 3 women) were classified into the PFP group with a score greater than +6. Table 1 presents the demographic information for both groups. Subjects were excluded if they reported any of the following: 1) a history of a lower extremity fracture or surgery; 2) musculoskeletal disorders in the ankle or foot, such as plantar fasciitis, ligament injuries, tendinopathy, or bursitis; 3) rheumatic pathology, such as gout, rheumatic arthritis, or lower extremity osteoarthritis; and 4) systemic diseases, such as diabetes or connective tissue disorders, like systemic lupus erythematosus [17]. Details of the experimental procedures were explained to all subjects, and informed consent was obtained from them when they were enrolled, which was approved by the Institutional Review Boards of Yonsei University Mirae Campus (approval No. 1041849-202103-BM-038-01).

Table 1 . Demographic and general characteristics of the subjects (N = 27).

The subjects wore fitted shorts, and dominant leg of each subject was tested barefoot. Four retroreflective circular markers (14 mm in diameter) were placed at both anterior superior iliac spines (ASIS), the center of the patella, and the second metatarsophalangeal joint. Subjects performed SLSD from a 15-cm step box [9,18]. The subjects were instructed to lower the non-dominant leg until the heel lightly contacts the floor and return to the initial position. The subjects were asked to clasp their hands behind their backs to accurately capture each of ASIS markers and avoid compensatory motions, such as using the upper extremities. The mean values of the measurements obtained in the two trials were used for data analysis.

Figure 3. Smartphone placement during the single-leg step down for video recording. A: 15-cm step box height, B: 250 cm from tripod to front of step box, C: 60-cm tripod height.

The Shapiro-Wilk test was used to assess data normality. Descriptive statistics were expressed as the mean and standard deviation. Independent t-tests were used to test for differences in age, height, body mass, body mass index (BMI), FPI score, FPPA, KID, and HOD between the PFP and control groups. The level of statistical significance was set at p < 0.05. All statistical analyses were conducted using SPSS version 25.0 (IBM Corp., Armonk, NY, USA). 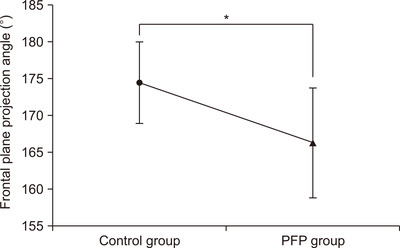 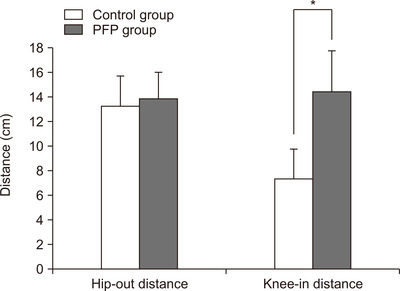 Figure 5. The hip-out distance and knee-in distance during the single-leg step down. PFP, pronated foot position.

The purpose of our study was to compare the DKV represented as FPPA, KID, and HOD during SLSD between subjects with and without PFP. Consistent with our hypotheses, the PFP group showed less FPPA and greater KID during SLSD. However, during SLSD, we found no significant difference in the HOD between the two groups. Based on our findings, when assessing the malalignment of the lower extremities using the SLSD, the PFP should be considered as a factor that could affect DKV.

Because KID was defined as the distance between the great toe and the point where the line connecting the center of the patella and ASIS intersects the floor [6], the KID value is directly correlated with the slope of the line connecting the center of the patella and the ASIS. The slope of this line is positively correlated with both the lateral pelvic displacement and medial knee displacement values. Considering the kinetic chain of the lower extremity, the PFP may contribute to reducing the appearance of a lowered medial longitudinal arch resulting in the medial tilting of the tibia. For this reason, PFP is associated with knee valgus in the weight-bearing position [20]. This could be a reason for the greater KID values during SLSD in the PFP group. In contrast, there were no significant differences in the HOD values between the two groups in our findings. Although there was no difference in the occurrence of pelvic lateral displacement between the two groups, considering the medial shifting of the pelvic position due to the medial tilting of the tibia, greater pelvic lateral displacement would have occurred in the PFP group.

PFP has often been described in connection with lower extremity injuries, such as medial tibial stress syndrome or patellofemoral pain syndrome [4]. PFP is positively correlated with internal tibial rotation [21]. Moreover, Tiberio [22] reported that excessive PFP could produce internal rotational stress at the lower extremity joints, accompanied by an increased strain on soft tissues and compression forces on the joints during weightbearing conditions. Therefore, when assessing the risk of lower extremity injuries using clinical screening tests, PFP is a crucial factor to be considered.

During the single-leg movement tests, to investigate which variables could affect DKV, previous researchers have focused on the strength of the hip abductors, hip external rotators, knee extensors, and the range of motion of hip external and internal rotation and ankle dorsiflexion [9,10,14,18,23-25]. However, because the SLSD is performed in a closed-chain position, the range of motion and muscular strength measured in an open kinetic chain position may not appropriately indicate the function of the lower extremities during the tests [26,27]. Additionally, to perform the movement tests, subjects with limited lower extremity range of motion may be forced to compensate for hip and knee movements despite adequate muscle strength [18]. This could be the reason why the effects of the aforementioned variables on DKV in previous studies are still unclear. It is important that the DKV may be influenced by several factors other than the strength and range of motion of the hip and knee joints.

Kagaya et al. [6] investigated the differences in DKV during single-leg movement tests between subjects with and without rearfoot dysfunction. They divided groups using a criterion of 5° of rearfoot eversion that occurred during the movement tests by 2D image analysis. However, 2D image analysis has a lesser sensitivity of measurement compared to 3D motion capture systems, so it may be difficult to detect angles less than 5°. Furthermore, determining the rearfoot eversion angle with a single flat marker at the Achilles tendon may not accurately reflect foot posture or tibial collapse relative to the calcaneal bone. In our study, we classified the groups by the FPI, which is a validated method for quantifying standing foot posture and could be used in general clinical conditions [16]. Accordingly, our results can provide useful information that reflects the effect of foot posture on DKV during SLSD.

This study has several limitations. First, our study may not account for gender differences. Generally, women showed more significant DKV than men during single-leg tasks. Thus, to remove gender as a confounder or to report an interaction between gender and DKV, further studies are needed to establish an appropriate gender ratio. Second, we did not measure the muscle strength or muscle activation of the lower extremities. Therefore, we cannot report how potential influences in the kinetics of the lower extremities between the groups may have affected our results. Third, 2D video analyses were conducted only in the frontal plane to quantify DKV values. Further studies are needed to investigate the differences in other kinematics of the lower extremity during SLSD in the transverse or sagittal plane between subjects with and without PFP.

Considering the kinetic chain of the lower extremities, PFP could result in a greater DKV during SLSD. During SLSD, the FPPA was lower and KID was higher in subjects with PFP than in those without; however, there was no difference in HOD between the two groups. Therefore, PFP is associated with a lower FPPA and greater KID. When assessing DKV during single-leg movement tests, the PFP should be considered a predisposing factor for occurrence of DKV.

This study was supported by the Yeoju Institute of Technology.