The aim of this study was to compare the activity of the upper trapezius (UT) and serratus anterior (SA) and ratio of UT to SA during shoulder elevations. Ten subjects with UT pain (UTP) and 13 subjects without UTP participated in this study. Subjects with a UTP of over five in a pain intensity visual analogue scale (0-10 cm) for more than 2 months and latent myofascial trigger points (MTrPs) in the UT muscle were included in the UTP group. Electromyography (EMG) data of UT and SA at 1st and 10th elevations were analyzed. Two-way repeated analyses of variance were used to compare the EMG activity of UT and SA and the ratio of UT to SA during shoulder elevations between groups with and without UTP. There was a significant increase in UT/SA ratio in the group with UTP compared to the group without UTP (p=.01). The activity of UT and SA measured at the 10th elevation was significantly greater than that in the first elevation (p<.05). The activity of SA was significantly greater in the group without UTP than the group with UTP (p=.03). However, there was no significant difference between groups with and without UTP in terms of UT activity (p=.28). These results indicate that UTP may have relevance to the increased muscle activity ratio of UT to SA during shoulder elevations.

Based on a study by Kibler and McMullen (2003), scapular stabilization is the result of the coupling of the UT and serratus anterior (SA) muscles. These muscles make scapular upward rotation during arm elevation. Most commonly, the scapular stabilizing muscles become fatigued from repetitive use. The SA muscles are the most vulnerable and susceptible to fatigue from repetitive movement. Previous studies have suggested that excess UT activity may attempt to compensate for a weak SA muscle (Ludewig et al, 2004). Weakness of SA and overuse of UT have been described in patients with shoulder dysfunction (Martins et al, 2008).

Prior to recruiting subjects, G*power analysis was performed to determine the number of subjects required to achieve a significant α level (.05), power (.8), and effect size (.61) based on pilot study. The result showed that eight subjects were required for this study.

Thirteen subjects without UTP and ten subjects with UTP participated in this study. All volunteers were recruited from Yonsei University. The general characteristics of the subjects were shown in Table 1. Subjects with UTP were included based on the following symptoms: (1) experience of UTP for more than 2 months, (2) latent myofascial trigger points (MTrPs) in the UT muscle, (3) visual analogue scale (VAS) score over 5. In this study, latent MTrPs was identified by painful taut band in the UT by manual palpation and a pressure-pain threshold (PPT) less than that of normal muscle (Lucas et al, 2004). The lowest PPT of normal UT muscle was 2.9 kg/cm2 for males and 2.0 kg/cm2 for females (Lucas et al, 2004). People who had glenohumeral joint instability, neurological dysfunction, pain in glenohumeral joint, and surgery experience were excluded (Lucas et al, 2004). All subjects were instructed about this study before participation, and consent were obtained from all of them. The investigation was approved by the Yonsei University Wonju Institutional Review Board.

Commander muscle tester device (Commander Muscle Tester, JTECK Medical, Salt Lake City, USA) was used for determining the dumbbell load during arm elevation. Subjects sat on the chair in upright position and elevated their arm 90° in scapular plane. Hand-held dynamometer (HHD) was placed on the wrist of the tested arm, which was pressed downward until subjects could hold their arm to 90° elevation. Maximal force was recorded by HHD.

Pressure algometer (FPK 60, Wagner Instruments Inc., CT, USA) was used to measure the PPT of UT muscle. The rubber tip of the pressure algometer was placed on the taut band of the UT vertically. Pressure was given to subjects until they felt pain or discomfort. The unit of PPT was kg/cm2.

EMG data were collected during 10 times of repeated arm elevations. Arm elevation task was performed for 5 seconds to target 90° position using metronome. The term between each elevation task was 1 second. The absolute RMS of shoulder muscles was collected during the middle 3 seconds of the 1st and 10th elevation sections. Absolute RMS value was normalized by maximal voluntary isometric contraction (MVIC). MVIC recorded data in manual muscle testing position (Hislope and Montgomery, 2007). For the assessment of UT MVIC, resistance was applied to depress the scapula and neck side bending to the opposite side during scapular elevation, neck ipsilateral side-bending, and contralateral rotation position. The maximal resistance for fully scapular protraction was applied for SA muscles. Data for MVIC were recorded 3 times for 5 seconds, with the middle 3 seconds used for analysis. Normalization was conducted to account for the intersubject variability of temporal and spectral estimators due to skin fold thickness of muscle size (Ge et al, 2012).

Subjects sat on the chair with hip and knee 90° flexion and feet on the ground (Lucas et al, 2010). 90° arm elevation in scapular plane was performed with extended elbow and neutral forearm rotation. Scapular plane was controlled by a vertical wooden bar that was set 30° anterior to the coronal plane (Lucas et al, 2010). 90° arm elevation was also controlled by a target bar that could adjust to the shoulder level of each subject. Strap was applied on the rib to prevent compensatory trunk side bending. In addition, external load was applied by dumbbell. The weight of dumbbell was decided by 25% of the maximum force measured by HHD (Wickham et al, 2010). Subjects elevated their arm to 90° in 5 seconds and 5 seconds for maintaining their wrist attached to the target bar using metronome. There was a remaining second for return to start position. These serial movements were repeated 10 times (Figure 1). 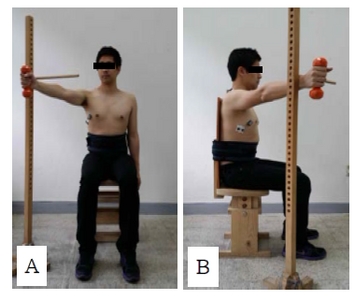 Shoulder elevation with dumbbell (A: coronal plane, B: sagittal plane).

Two-way repeated analyses of variance were used to determine the statistical significance differences of the muscle activity of UT and SA and ratio of UT/SA during arm elevations between groups with and without UTP. Significant level was set at α=.05. If a significant interaction between elevation time (1st and 10th elevations) and groups (with and without UTP) was observed, the simple effect was compared using Bonferroni correction (α=.05/4=.013). SPSS ver. 21.0 (SPSS Inc., Chicago, IL, USA) was used for analyzing. 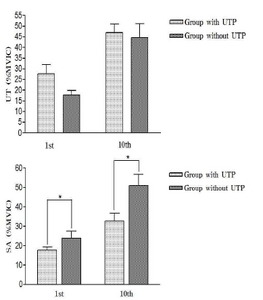 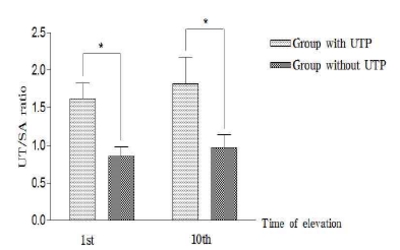 Comparison of the UT/SA activity during 1st and 10th elevation in subjects with and without UTP (UT: upper trapezius, SA: serratus anterior, UTP: upper trapezius pain,*p<.05).

In both groups, the muscle activity of UT and SA significantly increased at the 10th elevation compared to the 1st elevation. This can be explained by muscle fatigue due to repetitive shoulder elevations. When muscle is fatigued, motor unit recruitment is increased to compensate for the reduced force output (Ge et al, 2012; Piscione and Garnet, 2006). Increase of motor unit recruitment means increase of EMG amplitude (Piscione and Garnet, 2006). Although we did not measure directly muscle fatigue in this study, fatigue evoked by repetitive arm elevation seemed to contribute to increased muscle activity in the UT and SA.

Muscle activity of SA was significantly decreased in the group with UTP compared to the group without UTP. Less increase in SA muscle activity in the group with UTP can be explained by the alteration of a muscle’s synergistic function. UT and SA work together as scapular stabilizer. Stabilizer muscles are inhibited or weakened by direct injury, microtrauma (induced strain in the muscle), fatigue from repetitive movement, or painful conditions around the shoulder, with the SA muscles being the most susceptible to the effect of the inhibition (Kibler and McMullen, 2003). Pain in the UT and fatigue from repetitive arm elevation in this study caused SA inhibition.

The limitation of our investigation should be noted. First, other related muscles that participated in the movement of arm elevation were not studied. Lower trapezius and middle deltoid were activated at arm elevation movement as well as UT and SA. However, in this study, only UT and SA were observed because SA muscle is closely linked to UT pain and activation. Second, kinematic data of scapular upward rotation was not studied. Abnormal scapular upward rotation during arm elevation caused scapular dysfunction. Therefore, it is important to study how altered UT and SA activation affect scapular kinematics. Third, the data was only collected at 1st and 10th elevation time. Further investigation require more various shoulder elevation time such as 5th or more than 10 times.