Violinists assume static postures, and hold their instruments in the same position for several hours (Wilke et al, 2011). The static posture features lateral bending and/or rotation of the neck (Park et al, 2012). Repetitive or persistent lateral bending or rotation triggers an asymmetrical cervical posture, creating inappropriate mechanical stress on the side of the neck, inducing unilateral neck pain (Sahrmann, 2010; Wilke et al, 2011). A previous study found that lateral bending of the neck, rather than axial rotation (assumption of a more asymmetrical posture), may contribute to neck pain in some violinists (Park et al, 2012).

Studies have also found that hand dominance may affect the side of unilateral neck pain, but these results are controversial (Choudhari et al, 2012; Petersen and Wyatt, 2011). One study found no significant correlation between hand dominance and the side of neck pain (Petersen and Wyatt, 2011). Another study suggested that the side of neck pain was more commonly the dominant side (Choudhari et al, 2012). However, regardless of dominant hand, violinists use the left hand to stabilize the instrument, and the right hand to move the bow (Wilke et al, 2011).

Eighteen violinists with neck pain were recruited from the University of the Arts in Korea, and each completed a questionnaire describing the side and duration of neck pain. Subjects who reported unilateral neck-shoulder pain at a level above 3 (of a total score of 10) on a visual analog scale (VAS) after violin practice, were included in the study. The subjects were asked to rate the average level of neck-shoulder pain after violin practice, over the past 3 months, on a 10 cm VAS; 0 indicated no pain and 10 indicated the worst pain imaginable. Dominant hand was right in subjects. Prior to the study, the principal investigator explained all procedures to the subjects, all of whom signed informed consent forms.

Lower trapezius muscle strength was measured using Kendall’s method (Kendall et al, 2005). Each subject was placed in the prone position, and a rolled towel was placed under the forehead to maintain the neck in a neutral position, thus prohibiting excessive neck flexion during measurement. Each subject was then asked to raise an arm diagonally overhead, in line with the fibers of the lower trapezius muscle (Kendall et al, 2005). All subjects were able to assume this test position. To prevent compensation, the tester manually fixed the contralateral inferior scapula. Each subject was asked to maintain the arm in the test position as a tester applied resistance. The HHD sensor was positioned at the one-third position of the distal forearm, and downward force was applied by a tester until maximal muscular exertion was overcome. Two consecutive trials were performed on each upper extremity, with a 30 s rest between trials. The mean trial data from either side were used in the analysis (Petersen and Wyatt, 2011). The initial side of measurement was randomized, and the tester was blinded to the side of neck pain.

Age, height, weight, playing duration, pain duration, pain intensity and number of side of unilateral neck pain are summarized in Table 1. Lower trapezius strength on the ipsilateral side of neck pain [mean±standard deviation (mean±SD): 25.03±19.76 N] was significantly less than that on the contralateral side (mean±SD: 29.22±13.46 N) (p<.05; mean difference: -4.2 N, 95% confidential interval: -8.0 N, -.4 N) (Figure 1). Mean±SD for percent of strength deficit on the ipsilateral side was 20.42±18.21%. No significant association between VAS score and percentage strength deficit was apparent (r=-.02, p=.93), and no significant association between pain duration and percentage strength deficit was noted (r=.29, p=.25). The association between the side of the neck pain and the side of the weaker lower trapezius was significant (x2=5.29, df=1, p<.05). 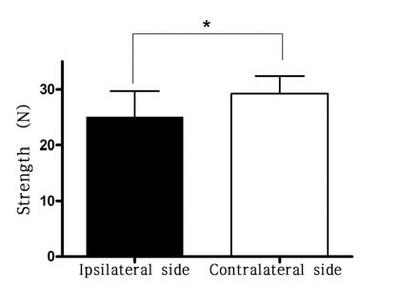 83% of the subjects (n=15) in this study showed left-side affection of unilateral neck pain, weakened strength of lower trapezius. And there was significant association between the side of the neck pain and the side of the weaker lower trapezius. The side of the neck and scapula of the all subjects was same who used the left side to stabilize the violin, and the right side to move the bow in this study. During playing the violin, it is easier to protract and elevate the left for stabilizing than the right scapula (Ackermann et al, 2002). Although repetitive bilateral scapular stress can cause biliateral neck pain, prolonged uneven loading of the neck, especially left lateral bending and flexion, causes unilateral pain, especially on the left side (Fry, 1986). Thus, repetitive and sustained use of left-side musculature may explain higher prevalence of unilateral neck pain in left side. Another possible cause about weakened lower trapezius in left side may suggest that right side of scapular musculature use dynamically for moving the bow, resulting higher strength of right lower trapezius during playing compared to static left side regardless of side of unilateral neck pain.

No significant association was evident between VAS score and percentage of lower trapezius strength deficit on the side of neck pain, suggesting that violinists with higher levels of pain did not have greater deficits in strength than those with lower levels of neck pain. This lack of relationship between lower trapezius strength and neck pain intensity was consistent with data from a previous study (Pearson et al, 2009). We also found no significant association between pain duration and percentage of strength deficit, suggesting that violinists with unilateral neck pain of a longer duration did not have weaker lower trapezius muscles than those with shorter pain durations. This is in accordance with a previous finding that strength deficit and pain duration did not correlate (Petersen and Wyatt, 2011).

Although we found no significant correlation among lower trapezius strength, intensity of neck pain, or pain duration, our results cannot be generalized to all violinists with lower trapezius strength deficits, because the violinists whom we evaluated could raise their arms from the prone position, against gravity. This means that muscle function was better than fair. In addition, we compared muscle strengths between sides; side-to-side differences in lower trapezius strength may also be found in healthy violinists or in those with bilateral neck pain. Hence, future work should compare violinists without neck pain, and with either unilateral or bilateral pain. In addition, this study did not investigate the strength of another scapulothoracic muscles except of lower trapezius, although another scapulothoracic muscles can influence the unilateral neck pain (Page et al, 2010). Future study should be needed to compare another scapulothoracic muscle strength such as upper and middle trapezius muscles, serratus anterior muscle.