Young-eun Choi1, and Duk-hyun An2

Correspondence to: Corresponding author : Duk-hyun An

Light touch cue is a sensory input that could potentially help in the control of posture. The immediate stimulatory effect of light touch cues using a cane during gait is associated with postural stability. This strategy can help post-stroke individuals regain their ability to perform the sit-to-stand (STS) transfer safely.

Somatosensory input through the hands and fingers assists with postural control. Lightly touching a rigid fixed object during quiet standing is known to decrease postural sway (Clapp and Wing, 1999; Krishnamoorthy et al, 2002). This is also observed when one lightly touches an unstable object, such as a mobile stick or the upper part of one’s own thigh. Lightly touching an object provides information on the relative movement of body segments and helps the trunk, arms, and thighs to sense their movements relative to one another (Jecka and Lackner, 1994; 1995).

Studies have been conducted on the association between postural sway and light touch during quiet standing (Johannsen et al, 2007; Reginella et al, 1999; Rogers et al, 2001). Some studies investigated the effects of light touch during dynamic postural control, including extending one arm reaching as far forward as possible without stepping, taking a single- leg stance, and walking (Boonsinsukh et al, 2009; Oshita and Yano, 2015). Compared to using a cane with contact force, light touch allows for the greater activation of the paretic weight-bearing leg muscles (Boonsinsukh et al, 2009).

Although gait is important to study in the rehabilitation of stroke patients, an essential prerequisite of walking is the ability to stand up from the sitting position on a chair. It is difficult for post-stroke individuals to recover their ability to safely rise from a chair (Boukadida et al, 2015). Their center of mass deviates to the affected side, and the displacement of their center of pressure increases in the anterior and mediolateral directions (Cheng et al, 1998; Duclos et al, 2008). The immediate stimulatory effect of light touch cues using a cane during gait is associated with postural stability (Boonsinsukh et al, 2009). This strategy can help post-stroke individuals regain their ability to perform the sit-to-stand (STS) transfer safely. However, some patients are unable to perform light touch contact with a cane even after a large amount of practice, as they cannot control the amount of cane force required to achieve the light touch threshold (Oshita and Yano, 2015).

Light grip sufficiently improves sway independent from a support, such as a cane. Thus, light grip improves postural stability when contact force is provided to the fingers. This is useful and can be applied to activities of daily living. The association between light touch and postural control during the STS transfer has not been fully examined; therefore, in this study, the effects of light grip on postural control during the STS transfer in post-stroke subjects were investigated.

Eleven participants (6 men, 5 women) with hemiplegia due to stroke were recruited in the present study. Subjects were included in the study if they (1) were more than 6 months post-stroke, (2) were able to stand up independently from a standard chair without using their arms or hands (3) were able to tolerate two hours of testing with appropriate rest periods, (4) had residual muscular weakness and motor impairment of the paretic lower limb (Chedoke-McMaster Stroke Assessment leg and foot score of <12), and (5) were able to maintain standing independently for at least 60 sec. Subjects were excluded from the study if they (1) had cognitive or language impairment, (2) had severe hemineglect, (3) had bilateral cerebral impairment, (4) had brainstem and cerebellar lesions, (5) had impaired touch and pressure sensation on the non-paretic hand, or (6) had a musculoskeletal disorder. Before starting this experiment, we explained the purpose of the study and obtained voluntary consent from all subjects.

Kinetic data were obtained by two force plates (Kistler 9260AA6, Kistler Instruments AG, CH-8408 Winterthur, Switzerland). The sampling frequency was 1000㎐. The two force plates were used to measure the force under each foot. The subjects were seated on a chair with adjustable height and no backrest or armrest. The height of the chair was adjusted to the distance from the floor to the knee joint center of each subject. Their feet were placed parallel with one foot on each force plate, with a 10 ∼15 ㎝ spacing based on the medial border of the feet. The ankle was positioned at 10° of dorsiflexion, and the knee angle was flexed at 100∼105°. The subjects performed three STS transfer at their self-selected comfortable speed (Figure 1). The first task was to perform the STS transfer and generate a strong muscular force to support their body weight while strongly gripping a standard cane with their non-paretic hand. The second task was to perform the STS transfer without generating muscular force while lightly touching or gripping a standard cane with their non-paretic hand, in which the touching force would be insufficient to provide mechanical body support (Figure 2). The third task was to perform a natural STS transfer. This task was initiated by the word start and was considered complete when the subject’s body weight became equal to the vertical force at the end of the rising phase. The length of the cane was adjusted to be 15㎝ away from the border of the fifth toe when each subject was in the standing position holding a cane with their elbow joint flexed at 20∼30°. Each subject performed each of the three STS transfer five times with a light grip, with a strong grip, and without a cane. The order of STS transfer was randomly decided, and each subject performed the STS transfer 15 times in total. To prevent fatigue, the subjects were allowed to rest for 5∼10 min after each trial. 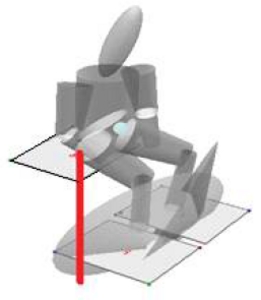 The set up for sit-to-stand with cane. 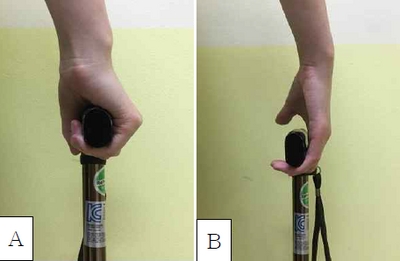 Methods of cane use (A) Depend on grip (B) Light grip

The peak vertical force during the STS transfer was calculated as a percentage of each subject’s total body weight. The difference in total weight bearing between the subject’s paretic and non-paretic legs and the change in force over time were calculated, and the force of each variable was represented by the peak power of the subject. The center of pressure sway for the whole body was calculated by the mediolateral displacement and the anteroposterior displacement.

Table 2 . Comparison of body weigh distribution, rate of rise, and COP sway during the sit to stand movement in the three task (N=11).

Standing up from a sitting position is one of the most common activities in daily life, but one-third of stroke patients experience a fall during this movement (Barreca et al, 2004; 2007). Therefore, it is useful to refer to information on compensatory maneuvers during STS transfers and to the effects of different ways of using a cane on dynamic postural balance.

STS transfers in a naturally sitting position without a cane resulted in an overall longer movement time than STS transfers with a light or strong grip. A faster movement time provides advantages such as increased movement speeds, joint moments, quadriceps activation, and mobility (Pai et al, 1994; Yoshioka et al, 2009). In other studies, the mean movement time of stroke patients during STS transfers was 6.15 secs without a cane and 5.30 sec with a cane, showing a decline in the movement time when a cane was used (Hu et al, 2013). While the patients’ mean movement time with a cane gripped lightly was longer than the equivalent with a cane gripped strongly, no statistically significant difference was observed. When the cane was gripped lightly, feedforward mechanisms may have been activated in the cutaneous receptors of the fingers and palms and in the proprioceptive receptors of the fingers, wrists, and shoulder joints, and therefore, this may have helped with postural control during the STS transfers (Johannsen et al, 2007). This is because tactile sensations which are entered via light contacts provide information on relative changes to the body segments, and postural maintenance becomes easier in the presence of tactile information than it is in the absence of such information (Tremblay et al, 2004; 2005).

The asymmetry in patients also decreased during STS transfers with a cane gripped lightly compared to that without a cane, which was similar to the result when a cane was gripped strongly. Hesse et al (1994) and Mazzà et al (2006) reported that subjects with hemiparesis showed trunk displacement toward the non-affected side before seat-off. In relation to this finding, Duclos et al (2008) explained that there is a correlation between the asymmetrical weight bearing of stroke patients during STS transfers and their trunk translation toward the non-affected side. While the body cannot be mechanically supported when a cane is gripped lightly, increased tactile sensations entered by the touched surface may have activated the postural control system.

This study has some limitations. First, since it involved 11 subjects who did not use a cane on a regular basis, large data of various types could not be produced. Second, the study used a small number of samples. Therefore, future studies are required to compare subjects at different stages of recovery using greater numbers of samples.