This is an Open Access article distributed under the terms of the Creative Commons Attribution Non-Commercial License (http://creativecommons.org/licenses/by-nc/4.0)which permits unrestricted non-commercial use, distribution, and reproduction in any medium, provided the original work is properly cited.

Esophageal cancer is defined as tumors along the lining of the muscular tube that connects the throat to the stomach [1]. It often occurs in men aged 60–70 years and accounts for 2.4% of all cancer deaths in South Korea in 2016 [2]. Despite the advances in cancer treatment, its prognosis remains poor. However, compared to surgery alone, patients who are eligible for neoadjuvant chemotherapy and radiation therapy achieved approximately 47% in a 5-year survival rate [3].

Several studies showed that physical exercise is beneficial in the aspect of QoL after completing the treatment [9-11]. Moreover, the 2-week rehabilitation program during hospital stay after esophagectomy reported an effective strategy in decreasing pulmonary complication. The incidence of pulmonary complications was 8.8%, which is lower than the previous studies. In this study, rehabilitation program was consisted of positioning, stretching of respiratory muscles and thoracic cage, deep diaphragmatic breathing, coughing and huffing, and early mobilization [12]. This study, postoperative rehabilitation focuses on reducing lung complications. However, there was no approach in identifying and treating musculoskeletal. Also, there is still a lack of research to show the beneficial effect of physical therapy program, and no study has included the description status of the skeletal muscle immediately after an esophageal cancer surgery Above all, there were no clinical research of neuropathy symptoms after esophagectomy.

The patient is a 60-year-old man diagnosed with malignant esophageal neoplasm on March 23, 2018, with chest pain and mild dysphagia. His height was 163.2 cm and weight was 61.1 kg, with a body mass index of 22.94 kg/m2, with no metastasis or comorbidity. He underwent concurrent chemoradiation therapy preoperatively. He was admitted on June 16, 2018, and underwent a Vinci Ivor Lewis operation on June 19, 2018, which showed that proximal, distal, and radial resection margins were not involved and no metastasis in 28 lymph nodes. Therefore, he was diagnosed with stage cT2N1M0 esophageal squamous cell carcinoma.

The patient was examined in the physical therapy room on June 20, 2018, for postoperative lung care. There were no other treatment programs other than physical therapy. He complained of pain on the chest tube and medial border sites in the right scapula. He also complained that he could not lie down on the bed below 60°. Thus, the changed sleep position and pain resulted in insomnia, which he reported as the most terrible symptom among other things. He more especially complained of shoulder pain and weakness than other patients who underwent esophagectomy. On physical examination, severe winging scapula in the right shoulder was noted (Figure 1). It was a positive in wall push up test. And, strength of serratus anterior muscle was poor in manual muscle test. On the results of electromyography (EMG) finding, abnormal spontaneous potentials were observed in the right serratus anterior muscles during rest, and polyphase unit activity potential of long duration was observed in the right serratus anterior muscles during moderate contraction. He was diagnosed with axonotmesis in the long thoracic nerve on EMG examination. This study was approved by the Asan Medical Center Institutional Review Board (approval No. 2018-1349). 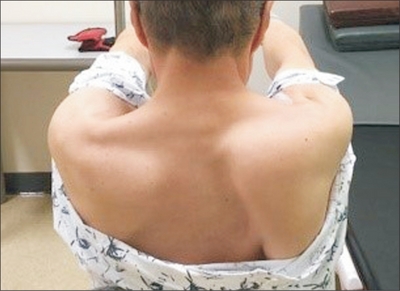 On his initial visit to physical therapy, the patient's chief complaint was shoulder pain and insomnia, but he also had a difficulty of expectoration due to pain in the surgical area. In addition, the 6-minute walk test showed decreased cardiopulmonary function due to decreased physical activity during pre-cancer radiation treatment. Therefore, physical therapy program consisted of breathing, chest expansion, soft massage, stretching, strengthening, and aerobic exercises. Physical therapy was performed for 60 minutes every day except weekends, and a total of eight sessions of physical therapy were received until discharge the hospital on July 1, 2018.

On the first day, the patient complained of severe pain on the rhomboid, i.e., level 5 on numeric rating scale (NRS) even during rest. Therefore, the physical therapist performed tolerable chest expansion and deep breathing exercise, right shoulder range of motion exercise, and diaphragm strengthening exercise in half sitting position. Incentive spirometry exercises using a coaching device (Coach II, Kendal; Tyco Healthcare, Mansfield, MA, USA) were recommended 10 times every hour as possible. For sputum excretion, coughing and huffing exercises were performed using tough techniques. Since the next day, biceps curl, shoulder flexion, and horizontal abduction using elastic band (Hygenic Corp., Akron, OH, USA) and squatting exercise were performed to strengthen the upper and lower parts of the body. The patient was informed on his Borg rating of perceived exertion scale and exercised at a “somewhat hard” intensity of 11–14, regarded as an exercise intensity level of 50%–70% of one ROM for resistance training for 1–3 sets of 10 repetitions. Physical therapist monitored the SpO2 and heart rate during exercise. To exercise winging scapula, Serratus anterior muscle strengthening exercise was performed progressively from no weight to resistance exercise. In a standing position, shoulder elevation exercise was performed from 90° to 120° against the wall and using a hand weight in the plane of the scapula. He was standing with back towards the wall, feet shoulder-width apart, and grasping elastic band handles with both hands. Starting with elbows flexed at 90° and shoulders abducted at 60° and internally rotated at 45°, he then performed a hugging action by pressing the handles away from the body, forming an imaginary arc with his hands. Once the hands came into contact with each other, he slowly returned to the starting position following the same arc. And, stretching exercise to pectoralis minor, rhomboid and levator scapula was performed to prevent shortening. Additionally, a 5-minute soft massage by using manual pressure release was performed on rhomboid muscle due to severe pain on the rhomboid and levator scapula in the right scapular. Aerobic exercise was performed from 20 minutes at 50% of the predicted maximum heart rate to 30 minutes at 60% progressively. Patients performed aerobic exercise using cycle (Ergoline 200k; Ergoline GmbH, Bitz, Germany) or SCI fit. Briefly, stationary cycle monitoring the target heart rate (HR: 90–108) was used with constant mode. Constant resistance was used from 20 W to 30 W. The intensity of aerobic and strengthening exercises was referenced from the guidelines for sedentary people, provided by the American College of Sports Medicine. For cooling down, active range of motion exercise (AROM) on the neck and shoulder and chest expansion with deep breathing and stretching of the lower extremities were performed Stretching exercise to pectoral muscle was performed to prevent of kyphotic posture due to surgical pain and sleeping position.

The 30-second chair stand test is performed by checking the chair stands for 30 seconds to assess the strength of the lower extremities. It has a moderately high test–retest reliability (intraclass correlation coefficient = 0.89) and moderate construct validity, as demonstrated by a correlation with the leg press (r = 0.77) [13].

The 6-minute walk test was performed in a 30-m hallway at his own pace [14]. The physical therapist encouraged him “you’re doing well” and check the oxygen saturation at pre- and post-evaluation. Moreover, dyspnea was measured using the modified Borg dyspnea scale [15].

The Korean version of European Organization for Research and Treatment of Cancer Core Quality of Life Questionnaire; version 3 (EORTC QLQ-C30) was used to assess the QoL. This questionnaire is widely used for various cancer and has been validated [16]. The Korean version of Quality of Life Questionnaire-Esophageal 18 (QLQ-OES18) was used to evaluate esophageal symptom [17], which were highly reliable and validated as esophageal cancer-specific [18]. In this questionnaire, the higher score in function means the better physical function, and the higher the symptom means the more the symptoms.

The Functional Assessment of Chronic Illness Therapy–fatigue (FACIT–fatigue) was used to assess fatigue, which consists of thirteen questionnaires. This is validated for chronic disease, and higher score means less fatigue symptoms [19].

Each shoulder AROM such as flexion and abduction were measured while sitting. The average value of three trials was recorded according to [20].

The NRS was used to measure pain, with 0 indicating no pain and 10 indicating severe pain [21].

Compared to baseline evaluation, at post treatment evaluation, the quality of life, physical function, role function, emotional function and cancer related symptom such as fatigue and insomnia (EORTC QLQ-C30). In aspect of esophageal specific symptom was not different except to pain (EORTC ESO18) (Table 1). Fatigue decreased from 15 points to 12 points in FACIT-fatigue. In addition, the pain score by NRS was reduced from 6 to 3. In the chair sit to stand test, he was able to do 10 times in the initial evaluation and 14 in the last evaluation. The 6-minute walk test also improved from 360 meters to 400 meters. The range of motion of the shoulder was limited in flexion and abduction at the baseline evaluation, but the shoulder ROM was restored to normal range after treatment (Table 2).

Table 1 . Comparison of values obtained for EORTC QLQ-C30, EORTC-OES18 between the baseline and after the physical therapy program.

Table 2 . Comparison of values obtained for FACIT-fatigue, NRS, and the 30-second chair stand test between the baseline and after the physical therapy program.

This case report is the first to describe a physical therapy program implemented immediately after the surgery and long thoracic neuropathy that occurred. The patient’s compliance on the exercise program was very good. He showed severe winging in the right scapula, mild dyspnea, and pain on the medial border of the scapula during the hospital stay. In addition, he also complained of severe insomnia due to posture changes during sleep.

This patient had an improved QoL, better shoulder range of motion, and decreased pain and insomnia after the physical therapy program. This is consistent with the fact that physical exercise and self-education program can benefit the postoperative QoL in patients with esophageal cancer [28]. He complained of severe insomnia. On the second day, he complained of severe insomnia. He reported that he slept just 1-hour because of uncomfortable postoperative position. Insomnia is a well-known significant problem in cancer patients [29]. Its prevalence in all cancer consists of 30–73% of patients [30].

One study reported that patients diagnosed with esophageal cancer and healthy people in Europe had similar long-term health-related QoL, despite of persistent reflux and trouble eating [31]. Another study revealed that the physical and role functioning domains of QoL are lower in esophageal cancer compared to the control [32]. Comparisons between the preoperative and postoperative function showed significant decreases in 6-minute walk test, physical evaluation of SF-36, and improved hand grip and knee extensor muscle strength [12]. However, throughout the inspiration muscle training, coughing was not improved in the esophageal cancer symptom, it is thought to be the problem of the reflux caused by the swallowing. Multidisciplinary rehabilitation is recommended including oral hygiene, pulmonary rehabilitation, physical fitness, swallowing evaluation and rehabilitation, nutritional support, and pain management. Therefore, multimodal rehabilitative is required [33]. However, physical therapy program is not provided for esophageal cancer in most hospitals in South Korea. Although morbidity associated with esophageal cancer is high, patients had improved physical function and QoL, and various severe symptoms required more attention in rehabilitation medicine. Therefore, a physical therapy program during hospitalization are thought to be helpful in significantly reduced muscle strength and reduced lung function, even if neuropathy is not observed, such as patients in this case.

The limitations of this study were performed one case without control and short-term period for physical therapy. We could not discern the natural course of restore after surgery. Large-sized and long-term follow-up should be conducted to clarify this study’s finding.

This study was supported by a grant (2020-0596) from the Asan Institute for Life Sciences, Asan Medical Center, Seoul, Korea.